Bonaire might have been on lockdown in 2020, but that didn’t keep Sea Turtle Conservation Bonaire from working hard.  Their recently published annual report highlights the latest news concerning sea turtle conservation for the island.  Between monitoring resident populations, nests and deploying a satellite tag, 2020 was a busy year for STCB. 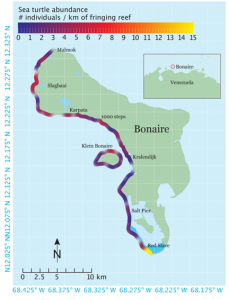 Bonaire’s resident turtle population and nesting turtles are monitored through transect-count surveys and nest patrols. Between the months of May and December, volunteers and staff patrolled the beaches looking for new activities. Once marked, these nests were kept under surveillance and excavated after hatching to calculate hatching success. In addition, 108 in water surveys were conducted, allowing STCB to estimate local populations of 555 green and 70 hawksbill turtles.

Long-term data on specific turtles is gathered through the capture-tag-recapture project.  Through this effort, recaptured turtles are measured, weighed and checked for signs of fibropapillomatosis to track growth rates and the overall health of the population.  Additional DNA samples provide key insight to the distribution of turtle populations throughout the Caribbean. Using data collected over the past 16 years, STCB has been able to show a slight increase in green turtle populations within Lac Bay.  So far, over 3,500 turtles have been tagged which will continue to provide important information for years to come.

Turtles are migratory by nature, spending much of their life in transit. Although there is still much to be learned about their behavior, satellite tracking is giving researchers a never-before-seen glimpse of these routes.  Understanding their migration routes and identifying areas of foraging and nesting will provide important information shaping conservation efforts in the future. STCB has been placing satellite trackers on turtles since 2003.  In 2020, the 26th tracker was placed on “Flappie”, who once tagged, traveled to Aruba before continuing on to the Miskito Cays off the coast of Nicaragua. 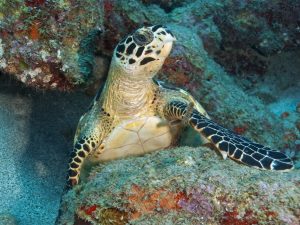 Sea turtles face a barrage of threats, from being caught as bycatch to degraded habitats from coastal development and climate change.   Conservation groups such as STCB are instrumental for increasing local awareness and driving conservation efforts forward.