A new study from the Caribbean Netherlands Science Institute and Utrecht University investigated the sediment stabilizing ability of non-native seagrass species Halophila stipulacea, found off the coast of St. Eustatius.  This new fast-growing seagrass has rapidly outpaced native species, leaving many to wonder if its explosive growth will be to the benefit or detriment to the island. 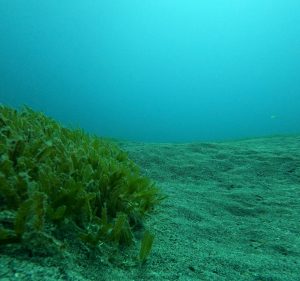 From anchoring sediments to creating fields of foraging and nursery areas, seagrass meadows play an important role in near shore environments.  Alarmingly, research from St. Eustatius has revealed that the seagrass meadows which once encompassed the entire island are now limited to a small area along the northern shelf. Furthermore, where native species such as turtle grass (Thalassia testudinum) and manatee grass (Syringodium filiforme) have disappeared the non-native species Halophila stipulacea has rapidly spread.

A new study conducted by the Caribbean Netherlands Science Institute and Utrecht University worked to explore the impacts of this population shift.  Namely, the study hoped to determine if this new species could stabilize sediments and help prevent coastal erosion as effectively as native species historically found in this area.

After 14 weeks, researchers found that sediment within the H. stipulacea meadow had eroded, but this was mostly within the surface sediment layer.  The subsurface layer, however, was believed to be more stable due to the root and rhizome system of the seagrass and saw overall smaller variances when compared to bare sand areas, even during more extreme weather conditions.  Overall, there was less resuspension of sediment in non-native seagrass patches and more long-term sediment level stability when compared to open sand areas. 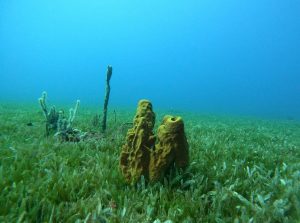 In addition to stabilizing sediments, this new habitat was found to support diverse invertebrate and fish populations.  More specifically, H. stipulacea seems to be popular among filter feeders such as sponges and bivalves, which then in-turn lures in predatory fish, improving overall biodiversity within the area.  Furthermore, since seagrass tends to grow adjacent to coral reefs, algae eating fish which are attracted to the seagrass then work to clean the neighboring corals. Finally, limited resuspension of the sediment coupled with the high update rates of nutrients by seagrass also means clearer waters for the neighboring corals

Although perhaps not as efficient as native seagrasses, the non-native seagrass H. stipulacea does appear to have some advantages.  Its fast-growing nature means that it can recover more rapidly after extreme storm events than native species. Its rapid expansion could help counter the massive seagrass losses seen around the island, contributing to more sand stability and improved habitat for a wide variety of marine life. 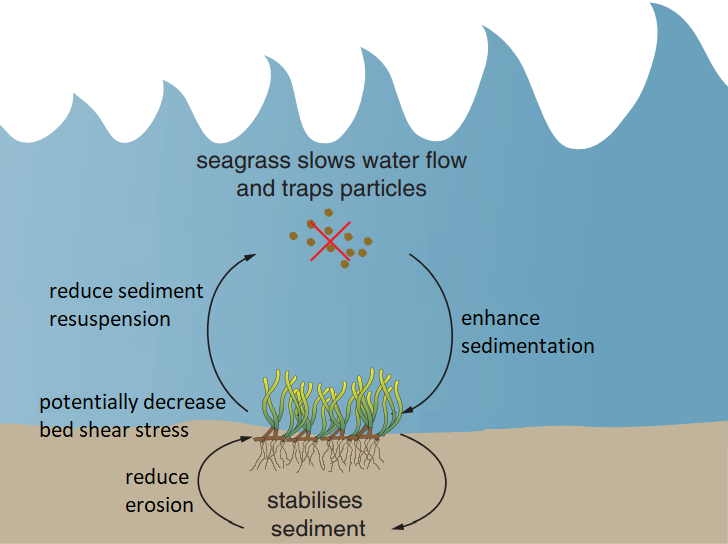 To learn more, the full report can be found on the Dutch Caribbean Biodiversity Database using the link below.

Seagrasses are increasingly being recognized for their potential in protecting the coastlines from flooding and erosion. As ecosystem engineers, seagrasses can attenuate waves as well as trap and stabilise sediment, causing the seabed to become more stable, which can contribute to coastal protection. Where many tropical countries lack the means to undertake traditional coastal protection measures, natural ecosystems, such as seagrass meadows, can provide cost-effective alternatives to protect coastal communities from natural hazards and improve their well-being, as ecosystem services are continuously provided. The Caribbean regions holds a large cover in seagrass relative to the coastlines, yet few studies have focused specifically on seagrass and sediment stability in this region. Over the last decades, native seagrass meadows have been degrading and the non-native Halophila stipulacea, originating from the Red Sea, has been spreading rapidly through the region relatively recently. A knowledge gap exists in whether this opportunistic species could provide essential ecosystem services, such as coastal protection, where native species have been lost. The extent to which seagrass species contribute to coastal protection services depends on the growth properties of these species as well as the environmental conditions. Therefore, a need remains to study sediment dynamics in seagrass meadows in different scenarios. The present study aims to increase the understanding of the role of H. stipulacea in sediment dynamics, specifying on the coast St. Eustatius, Dutch Caribbean.

First, current available knowledge on sediment stabilising properties of seagrass species in the wider Caribbean region was reviewed. Second, an experiment was set up at a study site with a depth of 18 m, in a monospecific H. stipulacea meadow, and in a sand patch within the meadow. In addition to measuring the growth properties of H. stipulacea, sediment stability was investigated by measuring changes in seabed level over time, as well as using sediment traps to calculate the sediment deposition rate. Data on meteorological conditions was retrieved to investigate correlations between the weather and sediment change.

Results showed that H. stipulacea at a depth of 18 m at the coast of St. Eustatius, grew a new shoot within 3.3 days, over twice as fast as measured for its native range. Average leaf length was 4 cm while eight shoots were observed per strand. Similar values were observed in its native range. Although the leaf length was smaller than most native seagrasses in the Caribbean, H. stipulacea showed a higher density, which likely contributed to the findings of this study. The sediment deposition rate was much lower in the H. stipulacea meadow than in the sand patch, which is probably the result of limited resuspension within the seagrass meadow. After 14 weeks, the sediment in the H. stipulacea meadow had eroded. This is believed to be the result of erosion of the surface sediment layer, a less stabilised layer of sediment that was potentially resuspended and carried away when the weather became more turbulent after months of calm conditions. The subsurface layer, however, is believed to be more stabilised by the root and rhizome system of H. stipulacea, which explains why smaller and relatively constant changes in sediment level were found after weather conditions had increased. The sediment level in the sand patch showed a larger variance over time, also varying much more spatially between erosion and accumulation.

This study showed that H. stipulacea seems to stabilise the subsurface sediment layer via its root and rhizome system, which is assumed to contribute to a more stable seabed. However, this result only became apparent after the erosion of the surface layer and might even disappear with more extreme weather conditions. This study urges for future research to investigate the sediment stabilising effect of H. stipulacea at shallower depths as well as over longer terms, as different results might be found for different seasons.