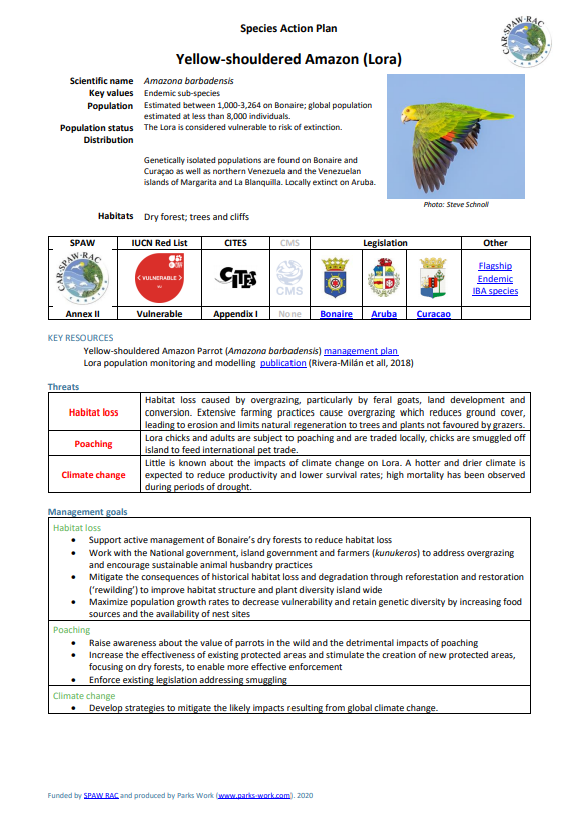 The breeding success of obligate secondary cavity nesting birds, including most parrots, can be limited by the availability and quality of nest cavities. Habitat degradation can reduce the number of large cavity-containing trees. This reduction in available cavities can be exacerbated by destructive nest poaching practices, which leave cavities damaged and unusable. Yellow-shouldered Amazons Amazona barbadensis inhabit degraded dry-forest areas on the island of Bonaire (Caribbean Netherlands), and were suspected to be limited by the number of suitable nesting cavities. We compared two approaches to increasing the availability of nesting sites, measuring occupation rates of 10 nest boxes and 10 repaired natural cavities over three years. While none of the nest boxes were used, two of the restored cavities were occupied within five months of repair, and a third in the following year. Only one of the breeding attempts in restored cavities (33%) was successful, compared to the population average of 56%. Sample sizes are small, but restoring natural nest cavities led to a higher rate of uptake than nest boxes and was a considerably quicker and cheaper intervention. However the effectiveness of this intervention depends on the threat of poaching, and there is a risk that restoring poacher-damaged nests may attract breeding pairs away from safer cavities. Scanned flyers of the RARE concerted conservation campaign to save the Yellowshouldered parrot on Bonaire.

The campaign is being continued since 2010 by Echo, who is organizing annual roost counts together with STINAPA and DROB.

There are 330 parrot species worldwide, of which a third is threatened with extinction. The Yellow-shouldered Amazon (Amazona Barbadensis) is a parrot species found in northern Venezuela and on the Caribbean islands Margarita, La Blanquilla and Bonaire. The total population size is estimated at 3.000-10.000 parrots, which has led the IUCN to classify its global condition as vulnerable. The population size on Bonaire is estimated at 800 parrots.
The goal of this study was to examine both the threats A. Barbadensis is facing on Bonaire and the opportunities to resolve them. Three methods were used during this process. First a literature study was conducted regarding the population dynamics of A. Barbadensis on Bonaire, resulting in a quantification of the different population parameters and environmental factors, affecting the parrot population. Secondly, a population dynamics simulation model was used to determine the sensitivity to changes in these environmental factors and population parameters. The model was finally used to analyze the impact of several scenarios on the population size over a period of 200 years.
The most important factor constraining the growth of the parrot population on Bonaire, is the limited number of nest sites in both trees and cliffs. Nest site limitation is inferred from the fact that only 21.5% of the population breeds annually. The low supply of tree cavities is caused by the exotic and invasive goats and donkeys who are responsible for the degraded state of the vegetation since their introduction in the 16th century. An eradication program would allow the ecosystem to restore to its natural balance. A. Barbadensis would benefit by increased survival in all life stages due to a substantial increase in food resources, which will prevent the parrots from having to visit the hazardous urban areas, and by an increase in the number of nest sites. The scenario exploring the effects of this drastic measure reveals a population growth to several thousands of parrots.
It must be noted however that this scenario does not include any density dependant factors that would eventually limit the growth rate.
The population is most sensitive to changes in juvenile and adult survival, which corresponds with the r/K selection theory and another theoretical viability study regarding A. Barbadensis. Conservation initiatives should therefore focus on increasing their survival as it will be more beneficial to the persistence of the species than improving upon chick survival and female reproductivity.
The exact effects of climatic stochasticity on parrots are not well known. This study assumed the climate affected both survival in all life stages as well as reproduction. Changes in the impact of the climatic stochasticity showed a high sensitivity, which emphasizes the need for a better understanding of the impact the climate has on the survival and reproductive parameters of A. Barbadensis. The parrot population on Bonaire can be considered as viable as the current conditions will not lead to extinction, nor will any of the other scenarios examined in this study. However, the reality might consist of a combination of these scenarios, affecting the parrot population more severely. It is therefore recommended, as a bare minimum conservational approach, to maintain the annual count of the population size in order to readily notice a decline in population size, enabling counter measures to be taken accordingly.

With the new status of special municipality Bonaire’s development aims have focused toward more efficient  sustainable policies. With centuries of human intervention, ecosystem degradation, pressure of invasive species and tourism industry, services associated with biodiversity are threatened by developmental needs. The Amazona barbadensis parrot is of special conservation concern due to the vulnerability to habitat degradation and poaching and its small range restricted to Bonaire and Northern Venezuela. We ask whether the spatial development plan of Bonaire (ROB) for the coming years has an either positive or negative effect on the parrot population in the island. We used METAPHOR, an individual-based stochastic population model in order to estimate the population trend for the next 200 years. We use two cases, poaching and no poaching, and four scenarios, Current, two scenarios contemplated in the ROB and one scenario of goat control and vegetation recovery that changes nest availability.For all the scenarios the model showed great stability around the year 100.Reducing poaching and controlling goats increased the population in each scenario with c. 50%. The ROB scenarios did not increase the population size or made it significantly lower, as only the (minor) impact on carrying capacity was taken into account. The estimated population size under current conditions was ~1800. Increasing poaching to 50% diminished this valued until 1000 while the poaching didn’t affect the age structure. Increasing availability of nests to 130 raised the population to 3000. The used survival of 87% for fledges and adults showed to be the most optimistic case in the sensitivity analysis warning about the real status of the population and the high uncertainty of the model. The control of the invasive goats has been a conservation success in other islands and showed to have the best outcome for the modelled population. Whether it is control of goats or vegetation restoration, increasing vegetation cover would favour conservationist and economic aims providing habitat for plant and animal communities and  providing more valuable services for terrestrial ecotourism.