The Red-bellied Racer (Alsophis rufiventris) is a harmless snake species that is native to the St. Christopher and Saba Banks. Today, it unfortunately only occurs on the islands of Saba and St. Eustatius, which represent just 11 % of the species’ original range. Previously the snake was also found on St. Kitts and Nevis, but was driven to extinction by the mongoose (Herpestes javanicus) following its introduction in the early 1900s. Little is known about the racer, which makes it an important species to study. However, studying snakes in their natural environment can be challenging due to their camouflage, secretive nature and cryptic behaviour.

On Saba and St. Eustatius, the racer plays a key role in the islands’ ecosystems by regulating small reptile and amphibian populations. Anoles, especially the endemic and highly abundant Anolis sabanus on Saba, and whistling frogs (Eleutherodactylus johnstonei) form an important food source for racers. 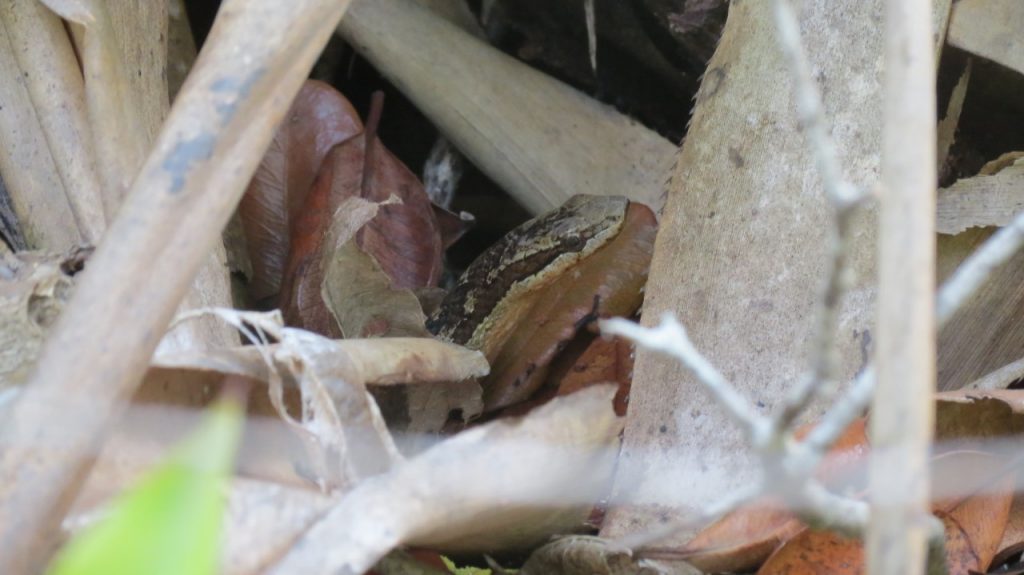 Despite the presence of invasive species such as black rats (Rattus rattus) and domestic cats (Felis catus), racer populations on Saba and St. Eustatius were previously described as “robust” and “abundant”, and were considered stable. For that reason, the species was downgraded from Endangered to Vulnerable by the International Union for the Conservation of Nature in 2016. However, in September 2017, category 5 hurricanes Irma and Maria caused extensive damage to the natural ecosystems on both islands, resulting in habitat loss, reduced prey abundance and increased racer mortality, which raised concerns for the conservation status of this species.

In 2011, a group of students from the University of Puerto Rico visited St. Eustatius for one week, where they conducted some racer surveys in the Quill and Boven National Parks. In 2018 and 2019, RAVON interns Kevin Verdel and Brent Kaboord conducted extensive surveys in the parks to monitor racer populations following hurricane impacts. Until this year, however, no quantitative data had been collected on Saba. Between July and September 2021, Hannah Madden from the Caribbean Netherlands Science Institute and volunteer Lara Mielke joined forces to conduct racer surveys on Saba. Replicating the methods used on St. Eustatius allowed us to compare the results from both islands and create a baseline for future research and conservation efforts. 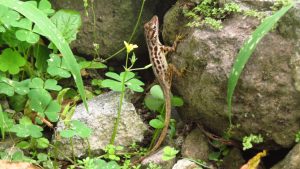 In cooperation with the Saba Conservation Foundation, Lara Mielke conducted line transect surveys along existing hiking trails, covering six different vegetation types and a range of elevations, from 100m to the top of Mount Scenery (870m). Occupancy modelling revealed that racers were present in all vegetation types and were more likely to be present at elevations over 400m. Distance analysis revealed a density estimate of 10.9 racers/hectare on Saba, which across the entire survey region (438.6 ha) gives an estimate of 4,917 racers. These results are similar to those from St. Eustatius, where racers were present in all vegetation types surveyed and mean abundance increased in line with elevation. However, density estimates from St. Eustatius were lower (9.9/ha in 2018 and 7.3 in 2019), with a population estimate of 3,915 racers across the study region (540 ha) in 2019. This suggests that the racer population on Saba is healthier than that on St. Eustatius, but this may be due to the fact that surveys on Saba were conducted later, giving the population more time to recover. 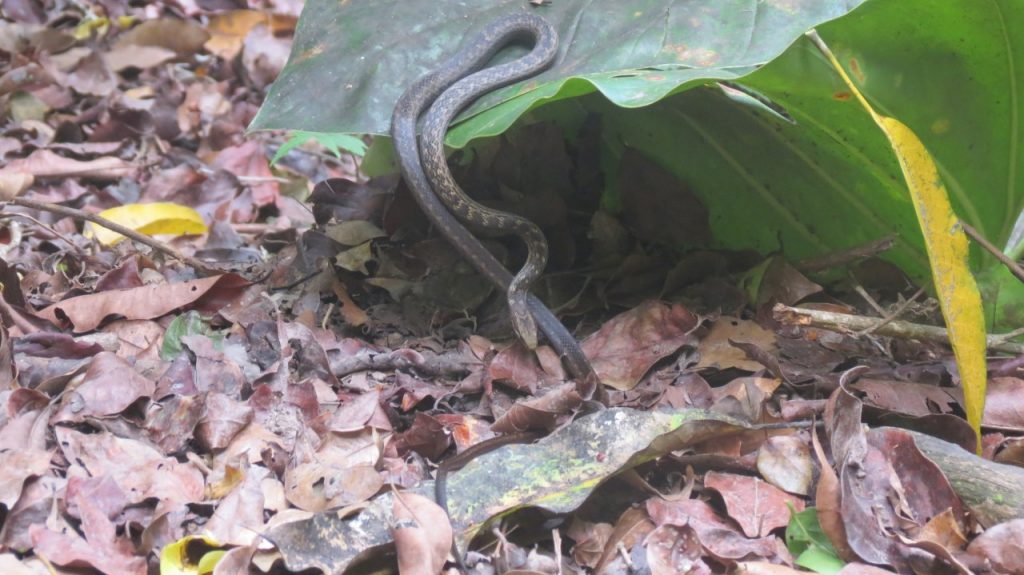 Unfortunately, few detailed studies exist on the ideal pre-hurricane density of A. rufiventris, however a 2016 study from Guana Island, British Virgin Islands, on the Puerto Rican Racer estimated 19/ha. While racer densities are likely to be species- and habitat-specific, based on literature describing pre-hurricane populations on Saba and St. Eustatius as “thriving”, it is highly likely that these suffered significant declines as a result of the hurricanes. The encounter rate of racers from St. Eustatius based on fieldwork in 2011 was estimated at 16/hour, which dropped to just 0.41/hr in 2019. On Saba, the current encounter rate estimate is 1.28/hr, thus while the species may have recovered since 2017, it is unlikely to be close to pre-hurricane levels.

Besides hurricanes, racer populations face a suite of additional threats on both islands, including ongoing habitat destruction and predation by invasive species. We are extremely concerned about the impacts of free-roaming domestic cats on racers, which appear to be especially pervasive on Saba. Saba residents continue to import pet cats from St. Maarten, despite this being prohibited by a local invasive species ordinance. Consequently, enforcement of legislation and prevention of local extinction should be a top conservation priority on both islands, especially given the species’ extremely limited range. 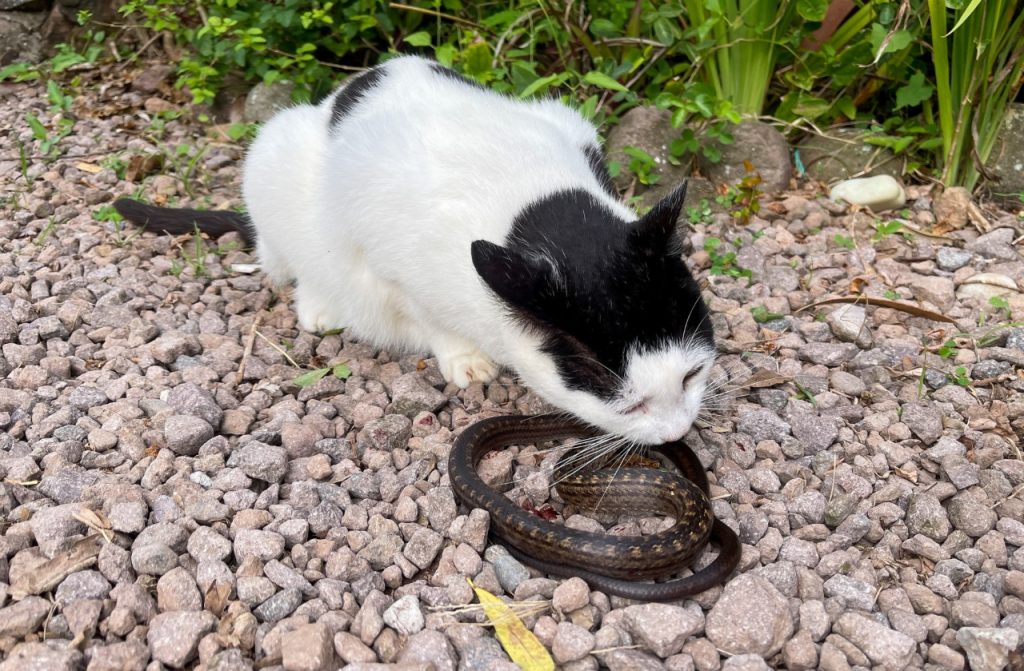 Domestic cat preying on a Red-bellied Racer on Saba (Photo: B. Noort).

University of Applied Sciences Van Hall Larenstein and Wageningen University and Research recently conducted a comparative study of artificial reefs within the Caribbean. This study provides new insights into the impacts of these structures on local marine life and neighboring ecosystems and highlight the need for comprehensive monitoring and integration into marine management plans.

Since the 1960s, artificial reefs have been placed around the Caribbean for tourism, to aid in improving fish stock, providing coastal protection and for scientific research. Unfortunately, there has been limited research to fully understand these reefs’ impact or compare artificial reefs to their natural neighbors. Researchers debate whether artificial reefs actually improve fish populations by encouraging increased reproduction or whether they are merely attracting fish from nearby reefs. Understanding how artificial reefs affect local fish populations and neighboring reefs will be critical in implementing meaningful conservation strategies in the future.

A new study conducted by University of Applied Sciences Van Hall Larenstein and Wageningen University and Research within the AROSSTA (Artificial Reefs on Saba and Statia, www.hvhl.nl/arossta) project aimed to evaluate the ecological effects of artificial reefs within the Caribbean. To do so, 212 different artificial reefs were analyzed based on reef type, location, deployment year, purpose, material, ecological development and fisheries management status.

The results proved very insightful. It was determined that the three most common purposes for artificial reefs were to serve as new dive sites (41%), for research (22%) and to support ecosystem restoration (18%). In addition, they found metal and concrete to be the most widely used materials. They also found a number of factors which could help bolster fish populations, such as reefs which more complex geometries and those placed in areas of dense seagrass.

This study also found that of all the artificial reefs, only 38 are located within marine protected areas which prohibit fishing. This means that over 80% of all artificial reefs are fishable. This is especially true for the Southern and Southwestern Caribbean Including Aruba, Bonaire and Curacao) where 100% of the reefs are within legal fishing zones. As artificial reefs attract part of their marine organisms from surrounding habitats, intensive exploitation by fishers can adversely affect the fish stocks in the surrounding area and thus counteract any potential ecosystem benefits. 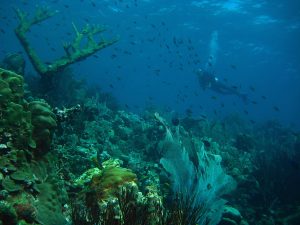 Effective marine conservation will require additional information on the impacts of artificial reefs on these local environments. The benefits of increased fish biodiversity and populations could be quickly undone by overfishing within the same area. The authors therefore conclude that the current management status of most artificial reefs in the Caribbean is a threat for its fish stocks. If implemented properly, artificial reefs could be a critical tool for future conservation efforts. Therefore, this study concluded that artificial reefs should be carefully monitored and integrated into future marine management plans.

To find out more, you can read the full study  by clicking the DCBD link below.