The Caribbean Netherlands island of Saba is home to a unique but relatively unknown iguana population. Given the many threats faced by islands worldwide, including the Lesser Antilles and Saba, fieldwork was conducted in 2021 in order to bring attention to this unique species and the threats it faces. As on St. Eustatius, the most urgent threats appear to be low survival of hatchlings, limited nesting sites, and the presence of non-native iguanas. 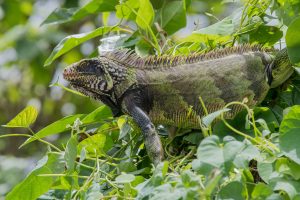 The iguana population on Saba forms part of a recently described species, Iguana melanoderma. Although there is no doubt about the unique appearance of the iguanas, experts are still deliberating over its exact taxonomic status. Despite this, it is clear that the population requires urgent protection given the number of threats it faces. The biggest concern is the presence of and possible further influx of non-native iguanas from nearby St. Maarten.

A recent study estimated the iguana population at just 200-300 individuals. This number is worrying and would be extremely concerning for the long-term survival of the population. However, because the data in the aforementioned study were preliminary, additional fieldwork was conducted on Saba in 2021. During this time, 38 transects were surveyed multiple times using distance sampling methodology, which allowed the population to be estimated more accurately. An unexpected positive result of this analysis is that the population is at least ten times larger than originally estimated, in the thousands rather than hundreds. 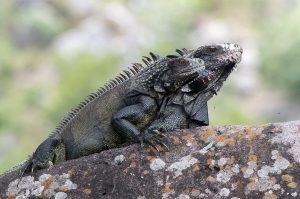 It is widely believed that black reptile species have evolved this color in order to be able to get warmer faster in colder climates, given that they are cold-blooded. This may also apply to the iguanas on Saba, which boasts the highest mountain in the Kingdom of the Netherlands: Mount Scenery (887m). This high volcano ensures that Saba is often cloudy, which could make it difficult for reptiles to get warm. However, we did not find any relationship between the extent of melanism and the elevation at which iguanas were found. In other words, iguanas that live higher up the volcano are not darker than iguanas at lower elevations.

Is there another explanation for why the iguanas on Saba are black? One hypothesis is that the original iguanas that established on Saba were already black. This is in line with the existence of partially black iguanas in Venezuela, which appear to be closely genetically related to the iguanas on Saba.

In order for successful reproduction and conservation of an iguana population, good quality nest sites are essential. It is well known that goats can destroy iguana nest sites through overgrazing, which leads to habitat destruction. Furthermore, goats can trample iguana nests and destroy the embryos inside eggs.

On Saba there is an enormous goat population (several thousands) which negatively impacts the island’s vegetation and causes erosion. During fieldwork we searched for iguana nest sites to evaluate their availability, distribution and quality. While this was not the main goal of the research, we were disappointed to find only four nest sites. 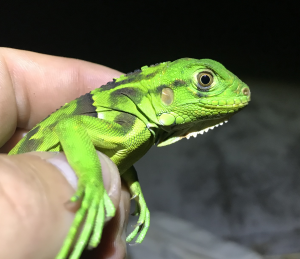 Another area of concern was the low number of juvenile iguanas found during fieldwork. Despite finding over 600 individuals, just 2.4% of these were juveniles or hatchlings. While the exact reason for this is unknown, one possible cause could be the feral cat population. Previous research on Saba demonstrated that feral cats exist in the lower altitudes of the island where they hunt for prey, which are exactly the same areas where iguanas prefer to nest. In fact, iguana remains were found in 9% of the cat scats examined.

Unfortunately, the situation for the melanistic iguana on Saba appears to be similar to that of the Lesser Antillean iguana on St. Eustatius, where the presence of cats and goats and an absence of suitable nest sites are well-known issues.

Despite the larger than expected iguana population on Saba, there are still many causes for concern. Clearly the species needs better protection as well as continued knowledge-building. Pressing concerns for the long-term existence of this species are the presence of free-roaming goats and feral cats, as well as the low number of juveniles and absence of suitable nest sites. However, by far the biggest threat is the presence of non-native iguanas which, though competitive hybridization, can mate with and thereby suppress the native population. During fieldwork, some individuals were found that looked different to the native iguana, and preliminary genetic research has confirmed that these animals were indeed invasive. This situation therefore requires the authorities to take immediate action in order to halt the invasion of non-native iguanas.

Simple Summary: The illegal pet trade remains an ongoing, substantial threat to wild populations,
especially small insular populations, and can even lead to extinction. Fraudulent activity within the
global reptile trade is known to occur, but its identification through forensic applications depends
on knowledge of diversity within wild populations. In this study, we assessed the geographic origin
of melanistic iguanas (Iguana iguana), which are only found in nations that have never authorized
legal export of live animals. Analysis of genetic data from two pet iguanas in the USA flag these as
originating from Saba or Montserrat, from which no export permits have ever been issued, confirming
their illegal origin. Despite the international trade in I. iguana, in which tens‐ if not hundreds of
thousands of specimens are traded each year, only a handful of individuals have been genetically
assessed. Our work highlights the utility of applying forensic genetic techniques to this trade in
order to track and discourage illegal activity.

Abstract: Lizards within the Iguana iguana species complex are among the most common reptilian
pets, with the widest natural geographic range among iguanids. Deep phylogenetic divergence distinguishes
multiple mitochondrial clades, and several taxonomic changes have recently been proposed.
These small populations, typically island endemics, are threatened by numerous factors, including
the international pet trade. Recent investigations reveal the absence of required CITES permits
for lawful export of animals, providing evidence of ongoing illegal trade. Additional monitoring
of trade in iguanas can be achieved through the application of forensic molecular techniques. In
this study, two captive melanistic iguanas were genotyped for molecular markers for which geographic
distributions of alleles have been established. Mitochondrial sequencing indicates that both
animals carry a haplotype known to originate from the islands of Saba and Montserrat, populations
taxonomically proposed to be Iguana melanoderma. Genotypes at 15 microsatellite loci are equally
consistent with this origin, given the results of a principal component analysis. This first forensic
genetic assessment within the extensive I. iguana pet trade highlights the presence of illegal activity.
The need for additional forensic assessments of pet‐trade iguanas is evident, especially given that
their value is driven by variety and rarity, which is further intensified by recent taxonomic changes.

The Lesser Antilles, in the Eastern Caribbean, is inhabited by three Iguana species: the Lesser Antillean iguana Iguana delicatissima, which is endemic to the northernmost islands of the Lesser Antilles, the introduced common iguana from South America, Iguana iguana iguana, represented also by the two newly described endemic subspecies Iguana iguana sanctaluciae from Saint Lucia and Iguana iguana insularis from Saint Vincent and the Grenadines, and Grenada, and the introduced Iguana rhinolopha from Central America. Drawing on both morphological and genetic data, this paper describes the Iguana populations from Saba and Montserrat as a new species, Iguana melanoderma. This species is recognized on the basis of the following combination of characteristics: private microsatellite alleles, unique mitochondrial ND4 haplotypes, a distinctive black spot between the eye and tympanum, a dorsal carpet pattern on juveniles and young adults, a darkening of body coloration with aging (except for the anterior part of the snout), a black dewlap, pink on the jowl, the high number of large tubercular nape scales, fewer than ten medium sized–triangular dewlap spikes, high dorsal spikes, and lack of horns on the snout. This new melanistic taxon is threatened by unsustainable harvesting (including for the pet trade) and both competition and hybridization from escaped or released invasive alien iguanas (I. iguana iguana and I. rhinolopha) from South and Central America, respectively. The authors call for action to conserve Iguana melanoderma in Saba and Montserrat and for further research to investigate its relationship to other melanistic iguanas from the Virgin Islands and coastal islands of Venezuela.