Two years ago we shared the worrying news that the Bridled Quail-dove population had suffered a significant decline on St. Eustatius (Statia) following hurricanes Irma and Maria in 2017. Almost four years on, has the situation improved? It is time for an update. 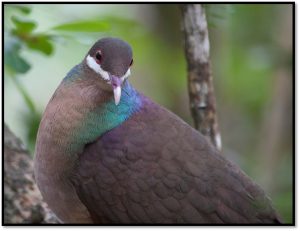 The Bridled Quail-dove (Geotrygon mystacea) is a shy, ground-dwelling species that is endemic to the Caribbean. It spends its day foraging the forest understory for fruits, seeds and the occasional gecko. Quail-doves prefer undisturbed forests with a closed canopy, and are sensitive to changes in their natural habitat. Unfortunately, the impacts of human-induced climate change mean hurricanes are becoming more intense and are occurring more often, which could spell trouble for this vulnerable species.

I began surveying Bridled Quail-doves in the Quill National Park in 2016. The Quill is a dormant volcano that rises to 600 meters with a large, accessible crater. It is the only habitat on Statia where the species occurs. Pre-hurricane, quail-doves were relatively common and observant birders could almost certainly spot one or two while hiking along the trails. The species breeds in May, when its mournful and unmistakable ‘whooo’ can be heard echoing through the forest. 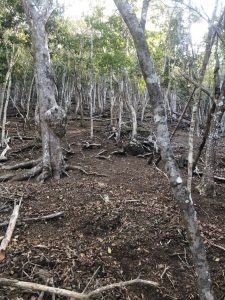 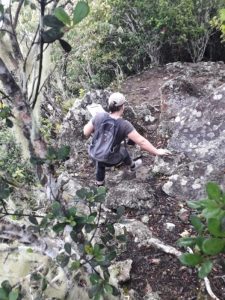 Hannah Madden during fieldwork in May 2021. Some 100 meter transects took up to 20 minutes to complete due to the steep and challenging environment (photo by Oliver Jones)

In September 2017 the forest habitat of the Quill suffered extensive damage from hurricanes Irma and Maria. Trees were stripped of leaves and fruits, branches were broken, and some trees did not survive. The effects of the hurricanes are still evident in some parts of the forest. In addition, we have a goat problem in the park; a very serious goat problem that has been pervasive for decades. Non-native, free-ranging goats overgraze already degraded habitats, resulting in a limited food supply and reduced understory cover for the quail-dove (as well as other forest-dependent species). Feral chickens disturb ground cover and compete for the same food source. Nest predators (invasive black rats and feral cats, both of which are present in the Quill) prey on eggs and chicks. This leads to lower reproduction and/or survival for the Bridled Quail-dove. There is no evidence of immigration of adults from nearby islands, which means populations are physically and genetically isolated. Based on the above we became concerned for the welfare of the Bridled Quail-dove and, thanks to support from many generous donors, BirdsCaribbean was able to provide funds to conduct post-hurricane surveys.

I conducted surveys of the Bridled Quail-dove in the Quill National Park. This involved walking previously established transects within the dove’s range (~150 to 600 m). We surveyed during peak breeding season (May) to allow for audio as well as visual detections. Once I saw or heard a quail-dove, I measured the distance of the bird from the center of the transect. I also recorded elevation and canopy height to assess their influence on Bridled Quail-dove presence. Once surveys were complete, I pooled all data from 2016 – 2021 to obtain abundance and density estimates per year. 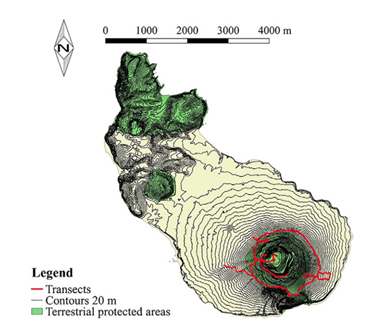 As shown in the graph below, effort has increased from 1,200 m of transects in 2016 to over 15,000 m in 2021. This means survey effort has increased 13-fold to detect around one third of the number of doves that were counted in 2016. As you can imagine, repeating so many surveys is physically demanding. 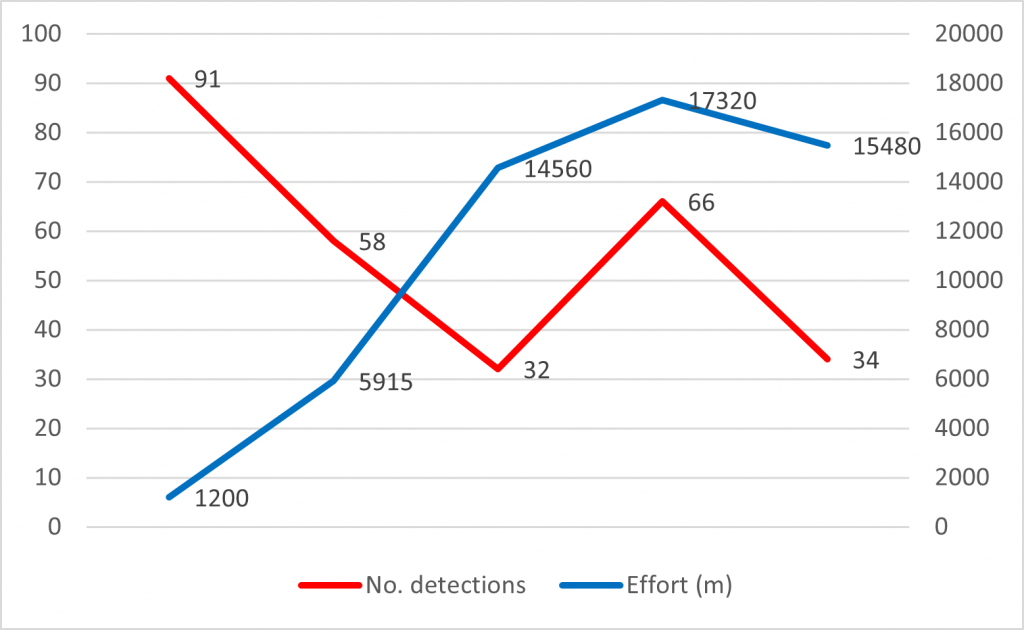 Unfortunately, abundance estimates of the Bridled Quail-dove on St. Eustatius have declined significantly since 2016, and the current estimate is just 123 individuals (min 72 – max 210). This is less than 50% of the 2019 estimate, and less than 5% of the 2016 estimate. 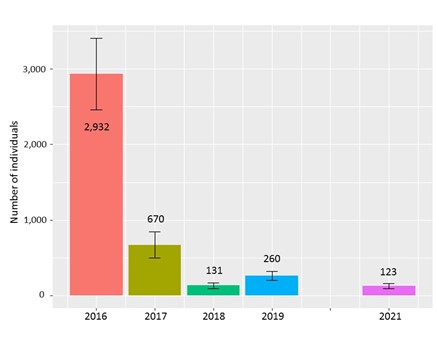 After assessing the influence of covariates on Bridled Quail-dove presence, I found that doves were more likely to be present at higher elevations in habitats with a higher canopy (such as inside the crater, along the rim, and on the upper outer slopes of the Quill). In contrast, I found a strong negative effect of year on dove presence. This means that in the years following hurricanes Irma and Maria, doves were less and less likely to be present in the survey area.

What now for the Bridled Quail-dove on Statia?

We are extremely concerned about the Bridled Quail-dove on St. Eustatius. The combination of habitat degradation and predation by invasive species is likely responsible for the continued decline of this species. Its long-term survival is now uncertain unless urgent conservation actions are implemented. Even if the dove does persist, such a small and isolated population faces additional risks such as inbreeding. Since hurricanes are likely to increase in frequency and intensity, this could be catastrophic for the Statia population, and others in the region. Recently the International Union for the Conservation of Nature proposed that the Bridled Quail-dove be reassessed based on our work on Statia. This means the classification could be changed from Least Concern to Near Threatened or Vulnerable, but data are still lacking from many islands. We encourage enthusiastic birders to conduct their own surveys so that local populations can be assessed. 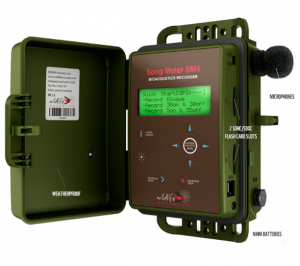 We will be working with local conservation NGO St. Eustatius National Parks (STENAPA) to create an Action Plan for the Bridled Quail-dove. To effectively protect the species locally, it is likely that multiple conservation actions will be required: goat and cat removal, rodent control, and feral chicken removal from the park. In order to achieve this we need the support of the local government and the community. Because of the tremendous effort now required to monitor Bridled Quail-doves on Statia, we also suggest trialing passive acoustic monitoring (PAM) devices during the breeding season. This involves the placement of recording units that can be placed in the field for up to a month to record and interpret calls. Using these devices will allow us to collect data in less accessible areas, as well as increasing the scale of our study. Hopefully by combining conservation efforts with field surveys and PAM we will have better news in the coming years.

Hannah Madden is a terrestrial ecologist with the Caribbean Netherlands Science Institute, based on St. Eustatius. She is also a member of the IUCN Pigeon and Dove Specialist Group.

Sint Eustatius was hit by two major hurricanes, Irma and Maria, during the high-intensity season of 2017. Two new studies aid our understanding of how local populations deal with these destructive events.

Caribbean flora and fauna have always dealt with the destructive forces of hurricanes. However, as climate change is leading to an increase in their frequency and strength and many species have decreased in abundance due to anthropogenic causes, a better understanding of how hurricanes effect local populations is essential. 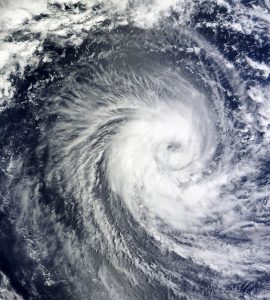 The Caribbean hurricane season of 2017 was the most intense recorded to date. Both Irma and Maria, category-5 hurricanes, closely passed Sint Eustatius and caused major destruction on the island; reported on in this Nature Today article. Although immediately after the storms it became clear that trees were heavily affected and mostly defoliated, understanding how and which species were affected requires time for data collection and comparison. Since 2017, several studies have provided pieces of information in order to understand how local populations coped, or not, with the 2017 hurricane season.

Since 2017, researchers have found that >90% of all trees were defoliated by more than ¾, and that especially trees at higher elevations (such as on the Quill volcano) were affected more severely. Another study that focused on the endangered Bridled Quail-dove (Geotrygon mystacea), demonstrated that the population declined by 77% in 2019 compared to pre-hurricane levels. A follow-up study in 2021 (not yet published) recorded a further decline to just 125 individuals, and the Bridled Quail-dove will likely be re-assessed by the IUCN.

Focusing on reptile species, two novel studies further aid our understanding of the ecosystem-wide impact that the 2017-hurricane season had on Statian biodiversity: 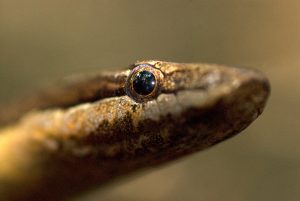 The first study demonstrates that the Red-bellied Racer (Alsophis rufiventris), indicated as Vulnerable by the IUCN, a harmless snake species now found only on St. Eustatius and Saba, was dramatically affected by the hurricanes. Compared to pre-hurricane density estimates (9.2 racers per hectare), post-hurricane estimates decreased by almost 50%. Encounter rates of individual racers have dropped from 16.0 snakes/hour in 2011 to less than 0.5 snakes/hour (post-hurricane). Given the current small size of the remaining population and the fact that the species’ current range is just 11% of its original extent, local extirpation is a real risk. 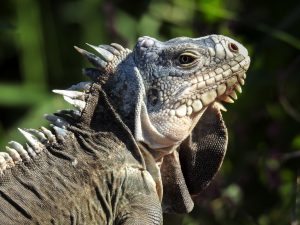 The second study, focusing on the Critically Endangered (Iguana delicatissima), shows that its population decreased by at least 20% during 2017. Comparing sighting and survey data from 2017–2018, the authors found a decrease in both the abundance and population size of the iguana species. Importantly, no recovery was observed in 2019, suggesting this small population needs multiple consecutive years without major hurricanes to recover. Interestingly, similar to Statia’s forests, iguanas at higher elevations were found to have been affected more severely.

Small islands such as Sint Eustatius are home to declining populations of rare and endangered species. In many cases, these isolated populations are unable to migrate between islands and thus populations can only locally increase in size. These new studies highlight the need to improve habitat quality and lower anthropogenic threats to optimize the natural recovery of both species. Ideally, at least for Iguana delicatissima, population increase could be aided by a local head-starting project where baby iguanas are nourished and released once they are larger and more likely to survive.

Find me if you can: Pre- and Post-hurricane Densities of the Red-bellied Racer (Alsophis rufiventris) on St. Eustatius, and a review of the genus in the Caribbean. Read Report

This handwritten report hurricane Lenny's damage to all dive sites on Klein Bonaire provides an overall impression of the condition of all corals / fishes & critters based on a dive of 20-45 minutes and a snorkle of 20-30 minutes for each site.

Please contact the DCBD admin or STINAPA for more information. THE BOTTOM – About 60 percent of Saba’s nature in general was devastated as a result of the recent hurricane Irma. According to Kai Wulf, Park Manager at the Saba Conservation Foundation, the top priorities of the foundation and it’s team of volunteers are clearing the hiking trails and combating further damage by invasive to the land and sea.

“Of course it looks really really bad right now, but we are looking to the future very positive. Nature has over the centuries learned to cope with such events, so sooner or later the nature will come back. Sometimes these events also act as a renewal,” said Wulf of the state of nature on the island.

On the evening of the 29th September 2016 Hurricane Matthew passed north of Bonaire by approximately 240km, with maximum sustained wind speeds over 120km/h. After passing Aruba as a category 2 hurricane, the path of Matthew slowed its forward progress and turned north-northeast. Heavy storm surge generated by Matthew continued to strike the coastline and on the 4th-5th of October, a resurgence of waves ranging from 1.4-1.7 m height pounded the northern and western (leeward) shores of Bonaire and Klein Bonaire. After the waves subsided, STINAPA immediately sent survey forms to dive operators requesting information on reef conditions and offered assistance in removing large debris. Bonaire National Marine Park rangers took photos of damage to piers, docks, ladders, etc. and began removing large debris from the reef (Appendix II: Image 7). On the 6th to 7th of October 2016, STINAPA staff, interns and volunteers surveyed sites along the leeward shore of Bonaire to assess the initial impact of Hurricane Matthew.