Smalls islands are especially vulnerable to climate change and land  use changes due to the competing needs for limited resources. To support the NEXUS approach we need evidence based monitoring tools that can provide policy makers, conservation managers, entrepeneurs, scientists and the general public with information on the state, pressures and associated changes in the environment. Satellite imagery can provide synoptic information at appropriate
spatial and temporal resolutions that can support evidence based monitoring. Only at very detailed levels information might be added by using airplanes or drones. Remotely sensed information can help to provide information on e.g. land cover and associated dynamics such as urban sprawl, mapping habitats such as mangroves and coral reefs, surveying terrain conditions such as soil moisture conditions and erosion hazards associated within catchments, sea level rise and changing coastlines, and on many aspects of the vegetation (natural and agriculture), such as plant traits, phenology and plant growth. Remotely sensed information can in general make field surveys and monitoring more effective, and can thoroughly support decision making.

ABSTRACT: There is increasing recognition that habitats should be managed as part of fisheries management. It is generally assumed that amount of suitable habitat is linked to production of de- mersal species and that maps of bottom type will provide the information needed to conserve essen- tial habitats. In this review, a synthesis of nursery habitat is made for Strombus gigas (queen conch), a large, economically important gastropod in the Caribbean region. Juveniles occur on a variety of bottom types over their geographic range. In the Bahamas, nurseries occur in specific locations within large, beds of seagrass, while obvious characteristics of the benthic environment such as seagrass density, depth and sediment type are not good predictors of suitable habitat. Rather, nurseries persist where competent larvae are concentrated by tidal circulation and where settlement occurs selec- tively. Nursery locations provide for high juvenile growth resulting from macroalgal production not evident in maps of algal biomass, and they provide for low mortality compared with seemingly simi- lar surroundings. Therefore, critical habitats for queen conch juveniles are determined by the inter- section of habitat features and ecological processes that combine to yield high rates of recruitment and survivorship. While maps of bottom type are a good beginning for habitat management, they can be traps without good knowledge of ecological processes. A demersal species can occupy different substrata over its geographic range, different life stages often depend upon different bottom types, and specific locations can be more important than particular habitat forms. Habitat management must be designed to conserve habitat function and not just form. Implicit in the concept of ‘essential habitat’ is the fact that expendable habitat exists, and we need to prevent losses of working habitat because of inadequate protection, restoration or mitigation. Key nurseries may represent distinctive or even anomalous conditions.

Shapefile of habitat types in 2015 and of a potential of a possible future with urban expansion and agricultural intensification.

See this report for more info. 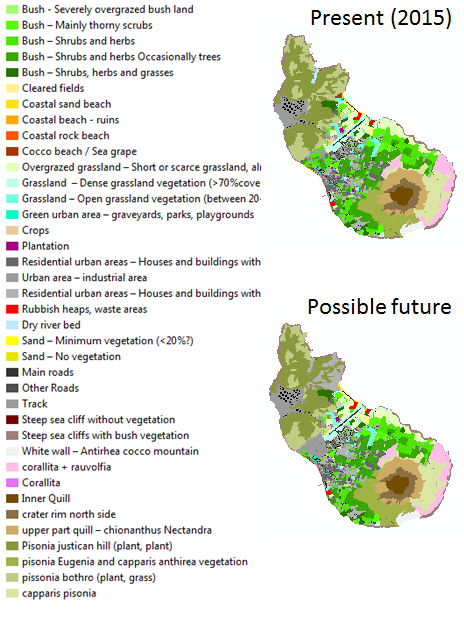 Quantitative habitat mapping and description form the basis for understanding the provisioning of ecosystem services and habitat connectivity, and hence provide an essential underpinning for marine spatial planning, management and conservation. Based on 869 video stations in a 150 x 200 m grid, we mapped 25.3 km2 of the near-shore island shelf of St. Eustatius at depths ranging 5-30 m. This yielded a coarse-grained map of the principal habitat classes of St. Eustatius’ seascapes. A total of nine principal seafloor habitats were distinguished. Gorgonian reefs amounted to 22% of the Statia Marine Park habitats sampled and were concentrated in the shallow wave-exposed eastern parts of the island (7.7 m average depths). The densest coral “scapes” and seagrass beds of St. Eustatius were concentrated at depths of about 24 m and only amounted to 4 and 5 percent resp. of the island shelf habitats studied. Whereas coral areas were essentially limited to the southern and south-western island shelf areas, seagrass beds were confined to the northern island shelf area. Including patch reef habitats, total hard coral-scape habitat for the St. Eustatius Marine Park amounted to about 19% of the area surveyed and about 475 ha of habitat. Sargassum reef habitat typically occurred at the seaward edge of communities dominated by hard coral growth.

The importance of reefs for man is multilateral and ranges from age-old functions, such as acting as a rampart preventing shore erosion, to modern mass tourism. Reefs offer man a source of income, actually providing subsistence for human populations. Food, often high quality protein , is the most important product . Reefs are also exploited for building material and for trade. Trade consists of living organisms such as aquarium fishes and other biota as shells, corals, etc. for jewelry and decoration purposes . A relatively new way of exploitation is by the tourist industry: snorkeling, diving and peripheral activities. Man grows more and more demanding in his use of the resources of the reef. Simultaneously, coastal development, urbanization and industrialization increase, obviously impairing reef communities . Reports on over-exploitation, pollution and mechanical destruction damaging reefs, are accumulating and show an increasing number of reefs suffering under the stress exerted on the shallow marine water habitat. Many reef areas are reported to deteriorate or be killed due to direct or indirect effects of tnan-induced disturbances

Precise habitat maps are drawn of this entire coastline and presented in fold-out maps in the back of the report.

[edit: a repetition of this study will presumably take place by Wageningen IMARES UR in the second half of 2013 to compare the two atlasses and pinpoint the changes that have occured over a little under 30 years.]