Located in the South Caribbean xeric region, approximately 800 m from the Island of Bonaire, Klein Bonaire is a small flat island (maximum elevation 7 m a.s.l.) with a surface of 690 ha of limestone of coral reef origin and an estimated age of 30.000 to 40.000 years. Free of herbivorous exotic species since the 1980s, it presents a dry thorny forest dominated in the central area by columnar cacti of two species, Stenocereus griseus, and Cereus repandus. These cacti have high production of flowers and fruit, suggesting high foraging activity of the two nectar-feeding bats that live on Bonaire Island, Glossophaga longirostris, and Leptonycteris curasoae. Ecological interactions established between these bats and the cacti (pollination and seed dispersal) are essential for the maintenance of the dry ecosystems present on Bonaire. In addition, the bat pollinated tree Crescenta cujete is also a common species in the plant community. Other species on the island use its fruits. Because of the short distance that separates Bonaire and Klein Bonaire, the second is an important source of food resources for L. curasoae, known to fly over seawater. As natural habitats of Bonaire, including protected areas, undergo a degradation process due to the negative impact of exotic herbivore mammals (goats, sheep, donkeys, and pigs) and the land suffers a fragmentation process due to touristic and urban developments, the importance of Klein Bonaire as food reservoir for fruit bats increases. This island is free of exotic herbivores, and the construction of any type of residential structure is forbidden. Despite being already considered a protected area locally and internationally, its designation as AICOM is important for several reasons: a) it will help enforce future management plans for the island in favor of its wildlife, b) it will influence the approval of future environmental projects on the island (e.g., reforestation, research, recreational activities), c) it will enforce the need to protect the island, d) it will facilitate its designation as a KBA (Key Biodiversity Area) and, e) it will complement the current system of AICOMs and SICOMs recognized for the ABCs. 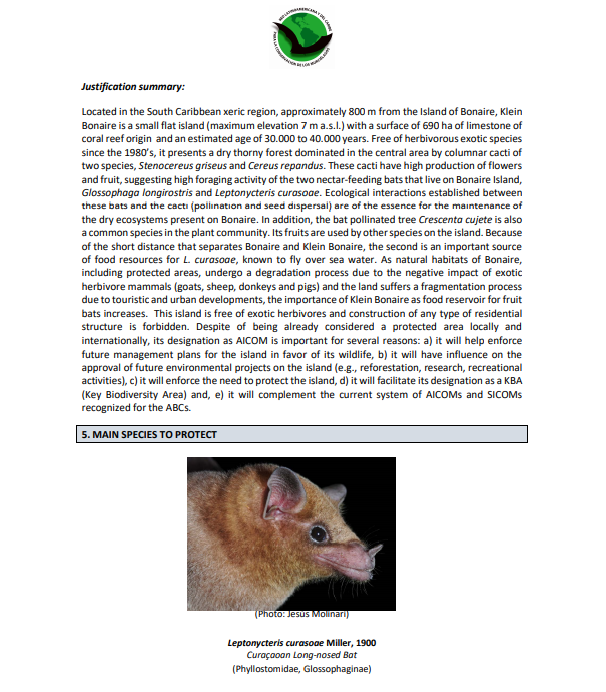 The Island of Bonaire possess a system of more than 150 natural caves, but only five of them are known to be used as diurnal and maternity roosts by the five species of cave-dwelling bats reported for this island. The Curaçaoan Long-nosed bat (Leptonycteris curasoae) uses all five, but only two of them are used by the Ghost-faced bat (Mormoops megalophylla). Leptonycteris curasoae is one of the two nectar-feeding species responsible for pollination and seed dispersal of columnar cacti in Aruba, Curaçao and Bonaire. This species has been classified as Vulnerable in the IUCN Red List of Threatened Species. Both L. curasoae and M. megalophylla depend on caves as diurnal roosts. Altogether, these attributes reflect clearly the great importance of providing special protection to the caves used by these species. Of the two maternity roosts shared by both species, Kueba di Watapana has demonstrated to be the most important, because it contains one of the largest colonies of pregnant and lactating females of L. curasoae during the reproductive period. Unfortunately, this cave is outside the limits of the protected areas on Bonaire. Its designation as SICOM will contribute to set the basis for adequate management plans and a protective legislation that secures the integrity of this roost and the colonies of L. curasoae and M. megalophylla present in them. The most positive direct impact of this SICOM will be the protection of gravid females of L. curasoae and their newborns. Finally, its designation as a SICOM will complement the AICOM already created. 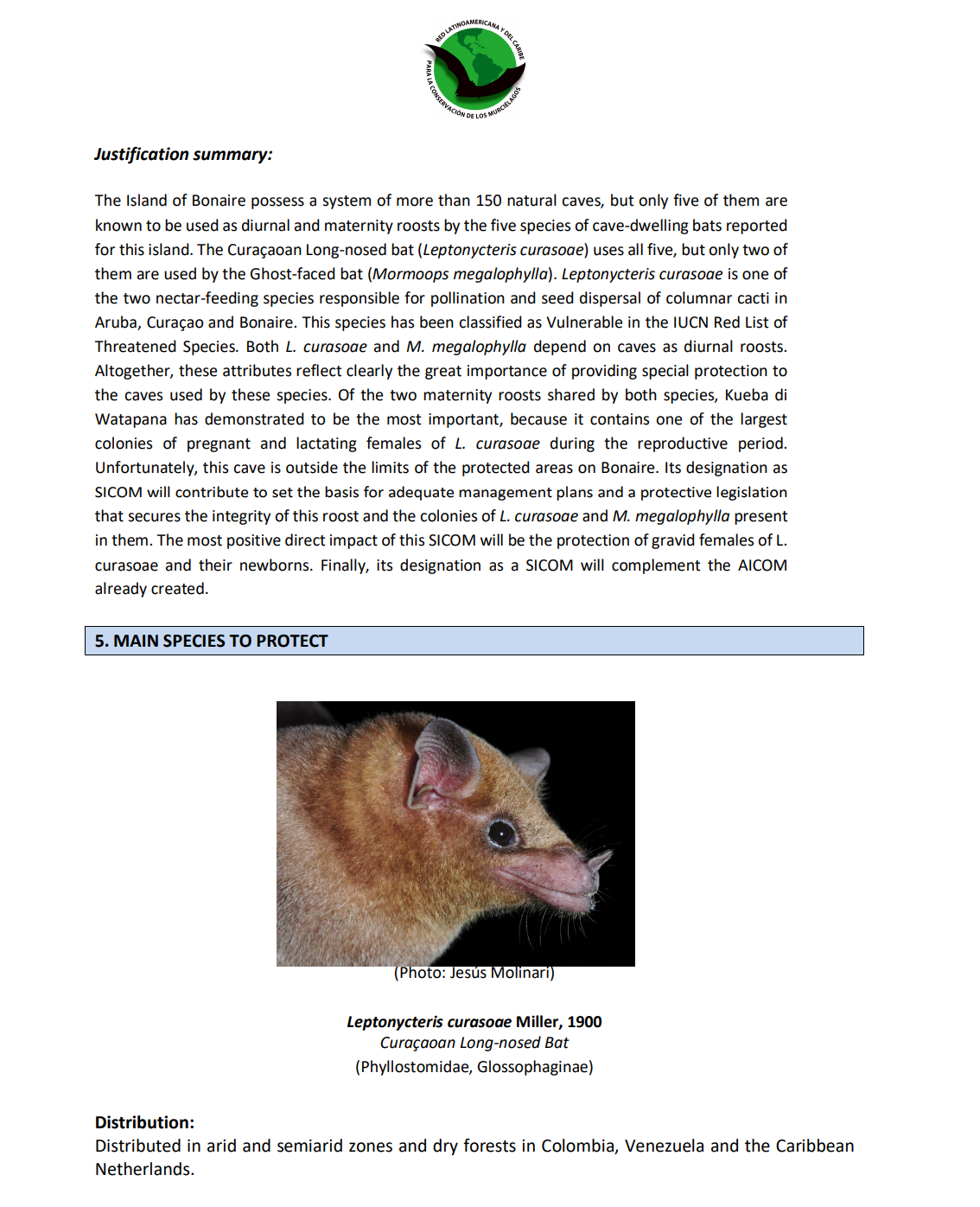 Destruction of nests and predation by introduced species are among the main factors responsible for seabird declines.The red-billed tropicbird (Phaethon aethereus) is a tropical, colonially nesting seabird whose distribution in Brazil is restricted to a small, isolated breeding colony located within Abrolhos National Park. This represents the southernmost population of the species in the western Atlantic, and is among the most southerly in its global distribution. Despite its isolation, the population on Abrolhos is threatened by egg predation by two invasive rat species: the house rat (Rattus rattus) and brown rat (Rattus norvegicus). In this study we conduct a population viability analysis of P. aethereus in Abrolhos to estimate the potential long term impacts of the rats. Our results indicate that egg and chick predation by rats has the potential to quickly drive the Abrolhos tropicbird population into serious decline. Reducing this threat may require the urgent implementation of a rat control program.

The conservation status of 845 zooxanthellate reef-building coral species was assessed by using International Union for Conservation of Nature Red List Criteria. Of the 704 species that could be assigned conservation status, 32.8% are in categories with elevated risk of extinction. Declines in abundance are associated with bleaching and diseases driven by elevated sea surface temperatures, with extinction risk further exacerbated by local-scale anthropogenic disturbances. The proportion of corals threatened with extinction has increased dramatically in recent decades and exceeds that of most terrestrial groups. The Caribbean has the largest proportion of corals in high extinction risk categories, whereas the Coral Triangle (western Pacific) has the highest proportion of species in all categories of elevated extinction risk. Our results emphasize the widespread plight of coral reefs and the urgent need to enact conservation measures.

The Caribbean Islands are composed of 30 nations and overseas entities: 12 independent nations, 3 U.S. territories (Puerto-Rico, US Virgin Islands, Navassa Island) and 15 European Overseas entities that are politically attached to France, the Kingdom of the Netherlands and the United Kingdom. The region is considered as a biodiversity hotspot of international importance, which encompasses over 7,000 islands, islets, cays and reefs ranging in size from just 5 km2 to over 100,000 km2.

BEST – an initiative to promote conservation in European overseas

The Caribbean region comprises one of the seven regions in the world, in which European Union (EU) Overseas entities are located: from the Arctic to the Antarctic, in the Atlantic, the Pacific, and Indian Ocean, and even in parts of the Amazon. Combined their Exclusive Economic Zones (EEZs) make the largest marine area worldwide, covering 15% of the ocean. They host 20% of coral reefs and lagoons, provide the last refuge to 6% of globally threatened and endangered species and are acknowledged as biodiversity hotspots for their immense diversity of species, ecosystems and landscapes. Together, the 9 EU Outermost Regions (ORs) and 25 Overseas Countries and Territories (OCTs) host more than 70% of Europe’s biodiversity.

This book has been created to help you make decisions about practical conservation management by providing an assessment, from the available scientific evidence, of what works and what does not work in conservation. It also tells you if no evidence has been found about whether or not a conservation intervention is effective.

The Conservation Evidence project has four parts, all of which are available from our website conservationevidence.com:

Species conservation is becoming an important aspect in marine environments. Climate change and anthropogenic interactions have had a direct impact on the health of local species in all of the world‟s oceans, and coral reef ecosystems are no exception. Studies from around the globe have focused on angelfish demographics. In general, species within the family Pomacanthidae reside in places containing crevices and cliffs but are also seen in sandy areas with reef and seagrass patches. Some species are seen in groups of up to five fish, having one male in a harem of one to four females. Pomacanthidae are also known to predate on sponges and are generally found in areas which contain them. On the fringing reefs in the Dutch Caribbean, the species Pomacanthus paru (French angelfish) have not been extensively studied in terms of population in relation to maximum reef relief. To measure both aspects, 30 m transects were laid out at depths of 3, 6 and 15 m. The number of P. paru individuals as well as seafloor rugosity was documented and compared through statistical analysis during a five week period from September to October 2012. Results showed that most P. paru were found along the deeper transects of 6 and 15 m which had higher rugosity and juveniles were only seen in the less rugose, sandy flats at 3 m. Data collected will aid in providing a baseline for conservation efforts due to the declining state of natural environments, and in turn, the decline of individuals within populations.

This student research was retrieved from Physis: Journal of Marine Science XII (Fall 2012)19: 59-63 from CIEE Bonaire.

Conservation is predicated on local support, and if scientists and resource managers wish to develop effective programs the cultural values and perceptions of surrounding communities need to be considered. As a result, researchers have shifted their attention to ethnography as a means to improve human-environment interactions and garner support for conservation. Bonaire serves as an ideal study site to explore the intricate relationship between cultural perception and environmental programs. Despite being a leader in conservation, current waste management programs greatly undermine island-wide environmental efforts and few successful solutions to address this discrepancy have been suggested. This study explored the cultural perceptions held by different subgroups on Bonaire (i.e. NGOs, divers, and conventional households) and provides valuable insight into how the community views environmental health and current management practices. Ethnographic methods were used to examine how three subgroups perceive environmental degradation, major factors contributing to ecological degradation, current management, and possible solutions, both individual and collective. Overall, 85% of all respondents identified environmental degradation as a problem on Bonaire. Salience values demonstrated that, overall, subgroups considered ‘humans’, ‘sewage’ and ‘garbage’ as the top environmental threats. Additionally, nearly all participants expressed a negative perception of management. Not only does this research highlight a general awareness of environmental issues by Bonaireans, but it also reveals that there exists a widespread feeling of support for conservation. It is imperative that the ideological and cultural differences identified through this research are noted and incorporated into future management plans.

This student research was retrieved from Physis: Journal of Marine Science XV (Spring 2014)19: 66-78 from CIEE Bonaire.

Scanned flyers of the RARE concerted conservation campaign to save the Yellowshouldered parrot on Bonaire.

The campaign is being continued since 2010 by Echo, who is organizing annual roost counts together with STINAPA and DROB.