The notion of an ecological corridor is to connect protected areas of high biodiversity to counteract the fragmentation of habitats, the loss of biodiversity and the negative impacts of human activities. It brings additional benefits such as strengthening ties between regions and creating a conservation area within a framework of ecological connectivity. The foundation CARIBESUR proposes the creation of a marine ecological corridor and Transboundary Marine Corridor "South Caribbean Islands" as well as the expansion of the National Parks "Paria Peninsula" and "Turuépano" and connecting them via a terrestrial ecological corridor. 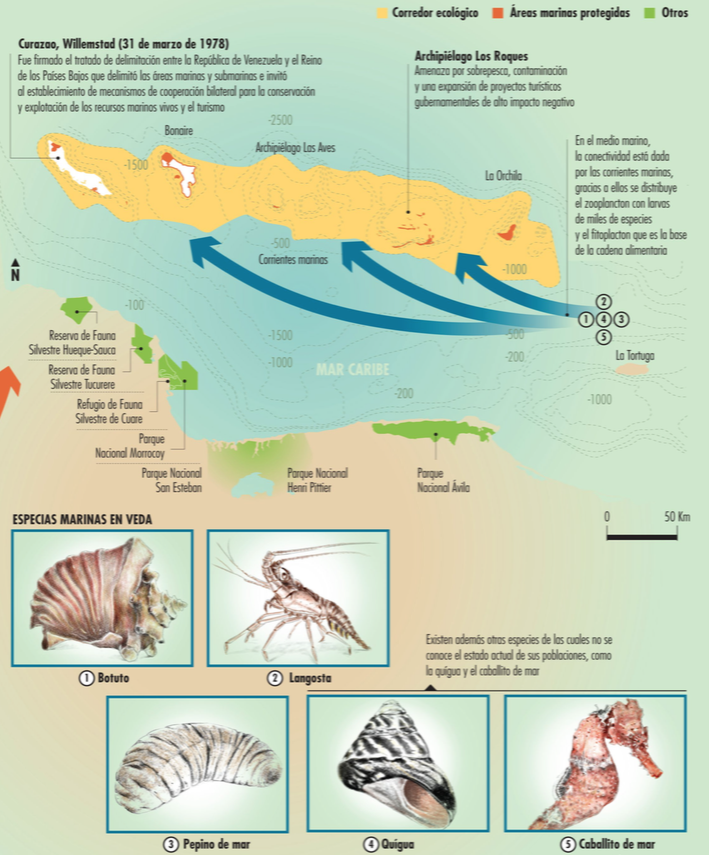 Detecting patterns of spatial genetic structure (SGS) can help identify intrinsic and extrinsic barriers to gene flow within metapopulations. For marine organisms such as coral reef fishes, identifying these barriers is critical to predicting evolutionary dynam- ics and demarcating evolutionarily significant units for conservation. In this study, we adopted an alternative hypothesis-testing framework to identify the patterns and pre- dictors of SGS in the Caribbean reef fish Elacatinus lori. First, genetic structure was estimated using nuclear microsatellites and mitochondrial cytochrome b sequences. Next, clustering and network analyses were applied to visualize patterns of SGS. Finally, logistic regressions and linear mixed models were used to identify the predic- tors of SGS. Both sets of markers revealed low global structure: mitochondrial ΦST = 0.12, microsatellite FST = 0.0056. However, there was high variability among pairwise estimates, ranging from no differentiation between sites on contiguous reef (ΦST = 0) to strong differentiation between sites separated by ocean expanses ≥ 20 km (maximum ΦST = 0.65). Genetic clustering and statistical analyses provided additional support for the hypothesis that seascape discontinuity, represented by oceanic breaks between patches of reef habitat, is a key predictor of SGS in E. lori. Notably, the esti- mated patterns and predictors of SGS were consistent between both sets of markers. Combined with previous studies of dispersal in E. lori, these results suggest that the interaction between seascape continuity and the dispersal kernel plays an important role in determining genetic connectivity within metapopulations.

Some excavating sponges of the genus Cliona compete with live reef corals, often kill- ing and bioeroding entire colonies. Important aspects affecting distribution of these species, such as dispersal capability and population structure, remain largely unknown. Thus, the aim of this study was to determine levels of genetic connectivity and dispersal of Cliona delitrix across the Greater Caribbean (Caribbean Sea, Bahamas and Florida), to understand current patterns and possible future trends in their distri- bution and effects on coral reefs. Using ten species-specific microsatellite markers, we found high levels of genetic differentiation between six genetically distinct popula- tions: one in the Atlantic (Florida-Bahamas), one specific to Florida and four in the South Caribbean Sea. In Florida, two independent breeding populations are likely separated by depth. Gene flow and ecological dispersal occur among other popula- tions in the Florida reef tract, and between some Florida locations and the Bahamas. Similarly, gene flow occurs between populations in the South Caribbean Sea, but appears restricted between the Caribbean Sea and the Atlantic (Florida-Bahamas). Dispersal of C. delitrix was farther than expected for a marine sponge and favoured in areas where currents are strong enough to transport sponge eggs or larvae over longer distances. Our results support the influence of ocean current patterns on genetic connectivity, and constitute a baseline to monitor future C. delitrix trends under climate change.

The Saba Bank is the largest submerged carbonate platform of 2,200 km2 in the Caribbean Sea, which lies partially within the Exclusive Economic Zone of the Netherlands and partially within the territorial waters of Saba and St. Eustatius. The Saba Bank houses an expansive coral reef ecosystem with a rich diversity of species and as such is also an important source of commercial fish for the nearby islands.

The Saba Bank furthermore forms the largest protected area of the Kingdom of the Netherlands, after the Dutch part of the Wadden Sea in Europe. It was declared a protected area by the Dutch Government in 2010 and has been registered as such in the Specially Protected Areas and Wildlife (SPAW) protocol of the Cartagena Convention for the Protection and Development of the Marine Environment of the Wider Caribbean. In 2012 it was internationally declared a Particularly Sensitive Sea Area (PSSA) by the International Maritime Organization (IMO) and an Ecological or Biological Significant Area (EBSA) by the Convention on Biological Diversity (CBD). As there are no large land masses nearby, the Saba Bank can be considered as relatively pristine and remote from human influences. Anthropogenic threats such as fisheries and environmental threats such as climate change, sea surface temperature increase and acidification, however, also threaten the Bank’s coral reefs.

The primary objectives of the 2011 and 2013 research expeditions were to collect data on benthic and reef fish communities, and on sponges and nutritional sources of the sponge community. Studies added to the 2013 expedition were research into the structural complexity of the reef; coral-algal interactions; and connectivity between populations. An international, multidisciplinary team of marine biologists investigated the coral reef structure as well as the spatial variation in species assemblages and population genetic connectivity of corals, algae, fish and sponges during eleven SCUBA dives at 20-30m depth.

During the expedition thirty-three 50m long transects resulted in more than 2000 images of the reef, and over 5000 fish counts of almost 100 fish species. A preliminary comparison with the data from 2011 gives the impression of a reduction in snappers, groupers and grunts, while there were noticeably more sharks. There were fewer algae on the Saba Bank than in 2011, possibly indicating a healthier reef, although there appeared to be a gradient of increasing algal cover towards the island of Saba. It seems unlikely that this is related to anthropogenic activities on the island, but more likely to natural causes.

An overview of collected data and preliminary results is given in this progress report. Further comparative analysis between the data collected in the 2011 and 2013 and further analysis between research components, e.g. between algal biomass, herbivorous fish biomass and nutrient levels, will be performed in 2014. This may give more information on the potential causes of the observed south-north algal gradient.

The expedition elicited large public interest and media coverage in both Dutch and Caribbean media (details provided in Appendix F). The work of the researchers, both above and under water, was also recorded on film as part of the documentary series Marine Life for Discovery Channel.