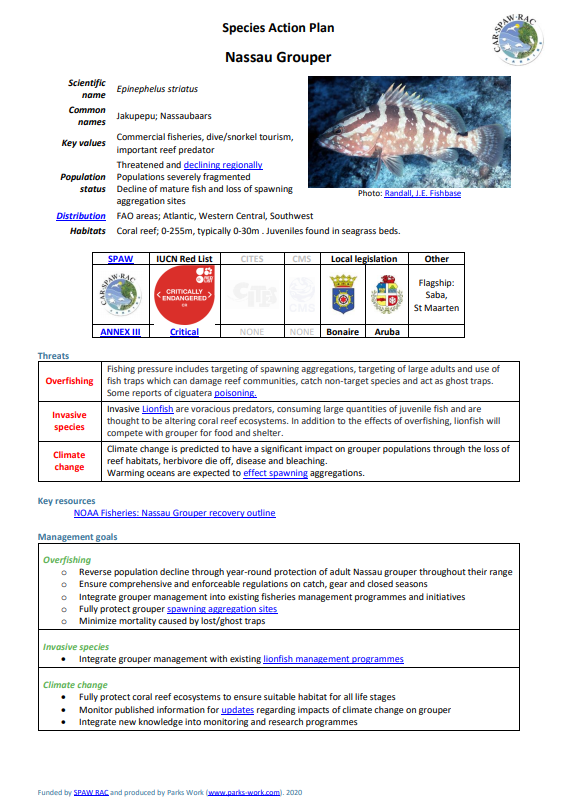 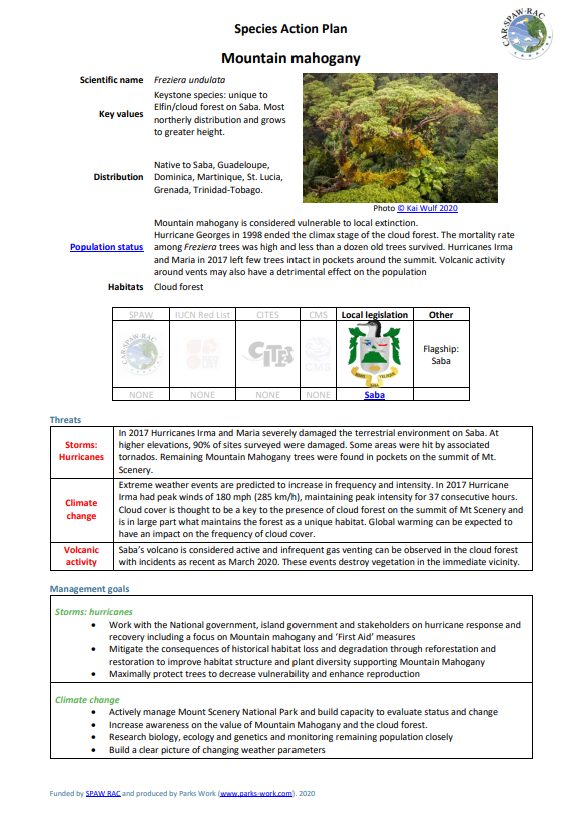 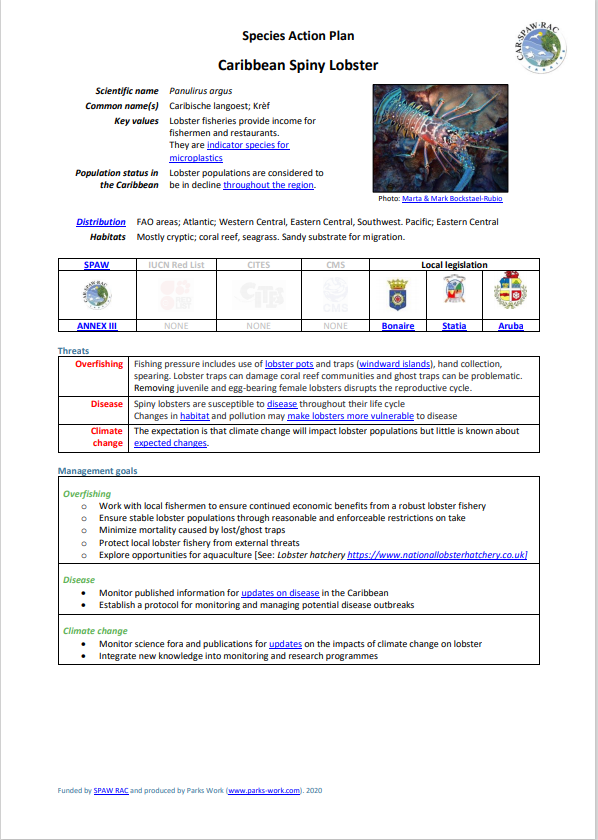 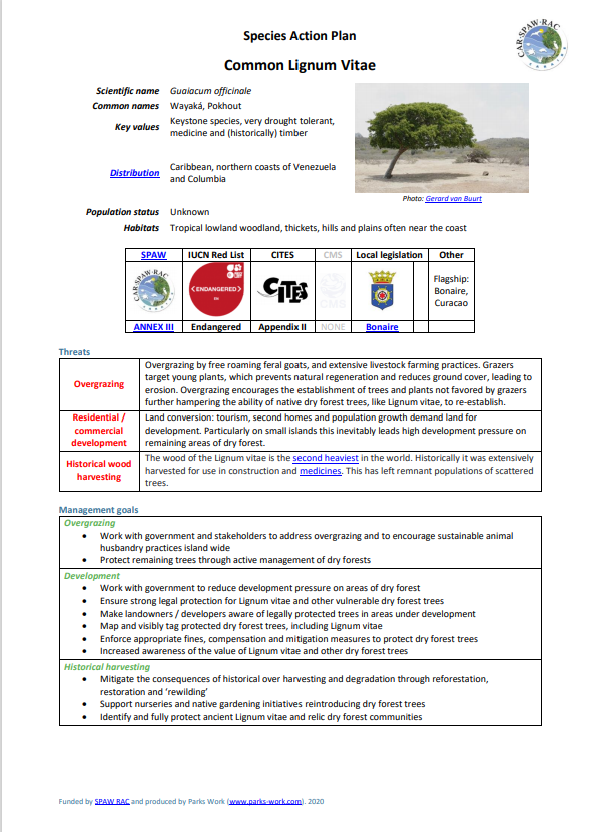 This action plan for the long-nosed bat describes: 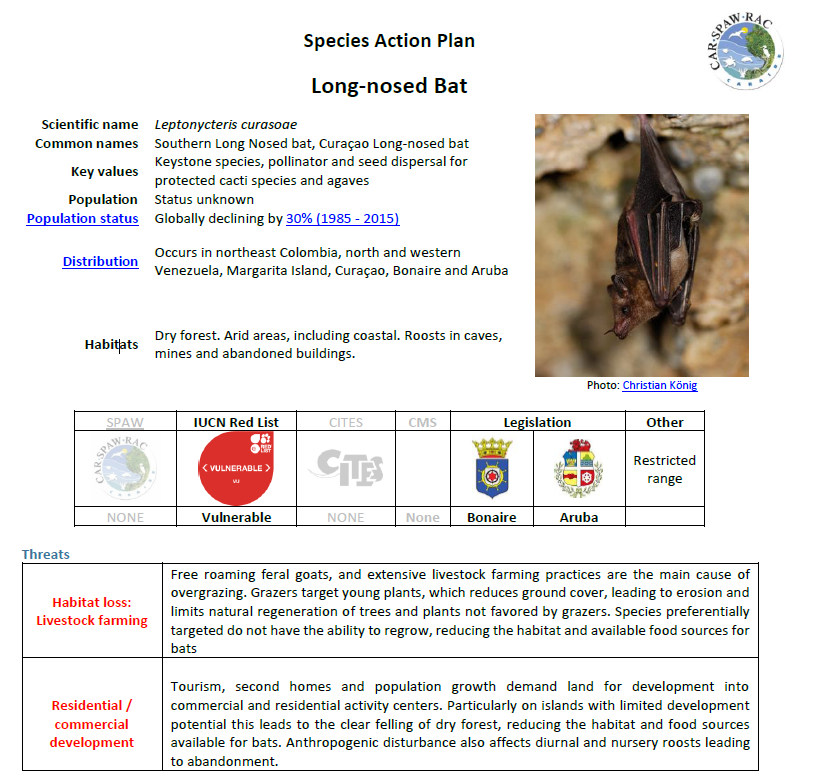 Recent inventories have documented no less than 211 exotic alien species in the wild for the Dutch Caribbean. These amount to no less than 27 introduced marine species, 65 introduced terrestrial plants, 72 introduced terrestrial and freshwater animals and 47 introduced agricultural pests and diseases. A list of these species, pests and diseases are found in resp. Debrot et al. (2011), Van der Burg et al. 2012, and Van Buurt and Debrot (2012, 2011). The rate of introductions and establishment of invasive alien species (IAS) worldwide has grown rapidly as a result of increasing globalisation. Invasive species cause major ecological effects (decimating native flora or fauna populations) as well as economic losses to these islands, across sectors such as agriculture (diseases, weeds and vectors), fisheries (fish diseases and the lionfish), industry (rodents and termites), tourism (roadside weedy species) and public health (mosquitos). Recently in Curaçao the kissing bug Triatoma infestans was found; this is a vector for Chagas disease. It almost certainly came in with palm leaves imported from South America to be used as roof covering for recreational beach “palapa’s”.

Several countries in the Caribbean have developed a strategy to address the invasive species problem already, such as Jamaica (Townsend 2009), the Bahamas (BEST Commission 2003) and St. Lucia (Andrew and John 2010, Chase 2011). Islands are particularly at risk because of a number of factors: their small size, resulting in small vulnerable plant and animal populations, a relatively large border which is difficult to control, a small human population lacking the necessary expertise and resources to take adequate measures. For islands, the sea acts as a strong natural barrier for natural transport of terrestrial flora and fauna, however human activities helped in overcoming this barrier. The issue of feral animals, especially roaming cattle, donkeys, goats create similar problems everywhere: they have a devastating effect on tree and shrub regeneration, which greatly degrades the natural vegetation, with severe soil degradation as a result. This shifts the competitive advantage to hardy exotics and creates runoff of nutrients and silt into the sea, where algal growth and silt deposition are damaging the coral. The new nature policy plan for the Caribbean Netherlands assigns a high priority to the invasive species problem (MinEZ 2013), which worldwide is considered second only to habitat destruction as a long-term threat to biodiversity (Kaiser 1999, Mooney 2001).

While acknowledging a focus on the Caribbean Netherlands in specific (Bonaire, Saba, St. Eustatius) this report sets the first key steps in developing a common frame of reference for the whole of the Dutch Caribbean (i.e. including the islands of Aruba, Curacao and St. Maarten). These islands share historical and cultural ties, partly similar climates, scarce expertise, and experience most IAS as a common problem. The magnitude and severity of the problem is evident and necessitates a joint strategy into which action at insular level can be embedded for maximum efficiency and synergy: a common Invasive Alien Species Strategy (IASS).

The main action points for implementation are:

1. Develop and adopt guiding legal lists for action: Black lists, Alert lists and Watch lists, enumerating the species for which border control is essential or for which control and management actions would be required. A special task group should be made responsible for keeping these lists up to date.

2. Install effective border controls. To prevent is better than to cure: the costs of controlling or eliminating invasives once established can be very costly. For this reason and because of the earlier indicated special vulnerability of the island ecosystems, it is strongly recommended to prevent the entrance of (more) invasives.

3. Establish Invasive Species Management Teams. For the coordination of data collection, evaluation and the initiation of actions, a special team is required. This ISMT team shall have its own facilities and budget.

4. Define responsibilities and mandates. Ultimate responsibility for IAS control lies with the island governments. This means that policies regarding IAS will be determined by the government. However, to be effective and efficient the ISMT (see 9.) needs full mandate to act within the limits of their own budget.

5. Require quarantine documents. Phytosanitary certificates and animal health certificates will be required for all imports.

6. Enforcement. Staff must be trained and instructed how to perform border controls. They must obtain sufficient mandate and means to confiscate and dispose of prohibited goods.

7. Develop action plans. A plan of action needs to be ready, describing the successive steps and decisions that have to be made for key threat species at all stages of the invasion process.

8. Arrange access to properties. When an alien species is invasive and needs to be eliminated, it is important that regulations allow the exterminators access to all properties, private and public alike.

10. Make rapid surveys. In order to decide whether a complete eradication is needed or that monitoring and restricting the distribution (mitigation) is the best or only option, a survey of the extent of the problem must be assessed by experts.

11. Rapid response. Usually a rapid action can localise the problem to a restricted area or eliminate the first individuals effectively so that no further costs have to be made.

13. Create an information system. A team of experts managing a computer database is needed. This ISMT team needs to develop a system for easy reporting of new discoveries of alien species, for maintaining and updating information on key threats. The information system supports policy, action and research at all levels of the invasion process.

14. Create a platform for cooperation. In order to develop the system further, a national as well as an island platform is needed for participation of all relevant stakeholders. These platforms will develop recommendations for the ISMT and the island governments, and may also act as support group for the ISMT.