Commissioned by Sint Maarten’s Ministry of Public Housing, Spatial Planning, Environment and Infrastructure (VROMI), a color vegetation map produced by CARMABI and Wageningen University & Research shows a 25% decrease in overall vegetation cover of the Dutch side of the island since 1956.  Results show that this loss can be attributed to massive urbanization and touristic development, overgrazing by introduced mammals (goats), the impact of hurricanes and the negative effect of invasive plant species. By investigating and mapping the vegetation of the island, spatial planning strategies can work to protect and connect the remaining sensitive landscape ecological units, to prevent further loss of biodiversity and vital natural resources. 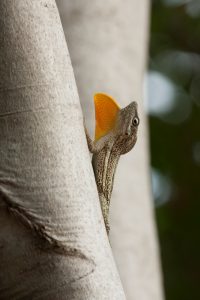 Vegetation maps are a useful tool in understanding the status of the biodiversity and species make-up of a particular area (e.g. of an island). These maps are used by a wide variety of actors, -from scientists to policy makers- and are key to spatial planning and designing nature management and conservation strategies. This gains extra relevance based on the fact that St. Maarten is a biodiversity hotspot in the Caribbean area: the island is inhabited by over 100 species which can only be found within the Lesser Antilles region and 12 species which can only be found on St. Maarten.  Furthermore, the vegetation types that are associated with the hilly landscape (the dominant landscape of St. Maarten) belong to the most threatened ecosystems in Latin America and worldwide.

A well-developed natural vegetation plays a critical role in securing balanced and healthy ecosystems. Areas with such a vegetation influence soil properties, prevent erosion, aid in water retention and provide important buffers between land and sea (preventing damage to coral reefs by sedimentation).  Not to mention the importance they play in providing food and shelter for a wide variety of the island’s native animal populations.

Changes in the islands’ natural vegetation since 1956 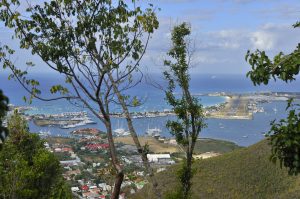 The results of an island-wide field study done at the end of 1999 shows that in comparison to a vegetation map published in 1956, a 25% decline in vegetation cover has taken place. In addition, five different vegetation types -found in coastal areas- have disappeared beyond recognition over those 40 plus years.  The interconnectedness of ecosystems on islands make them vulnerable to the impact of habitat loss and fragmentation as well as the negative impact of grazing by introduced mammal grazers and invasive plant species. Of course, we must not forget the detrimental effects of hurricanes and global warming.

Over time, habitat loss and fragmentation on St. Maarten have been caused by agriculture, grazing by introduced mammals and since the 1960s by an explosive growth in tourism. Particularly since 1980 tourism has skyrocketed on the island. Some vegetation units described in 1956 have also disappeared due to actual vegetation regeneration and succession to a more diverse state following the decline in agriculture and livestock grazing.

Although there has been some regeneration, the overall process witnessed for St. Maarten is that of loss of natural and semi-natural vegetated areas in all parts of the island. The largest disappearance took place in the western parts of the island that in 1956 were characterized by the presence of two evergreen vegetation types. In the Low Lands area, a climax evergreen vegetation type covering a large part of the area in 1956 has disappeared almost totally except for a very small area still present but seriously threatened. Large areas of a vegetation type with a deciduous character to the west of the eastern hill range have been lost. One could observe that the general trend shows that the hills are regenerating while the low and coastal areas are degrading at a faster rate, resulting in a net vegetation loss. This trend demonstrates the economic shift from mainly agricultural practices towards an economy heavily reliant on tourism.

Towards a more sustainable future for St. Maarten

Vegetation maps similar to the one produced in the present report have been completed by Carmabi for other Dutch Caribbean islands as well.  This includes maps of Curaçao (1997), Bonaire (2005), St. Eustatius (2014) and Saba (2016).  Since the 1980’s land-use planning has become a hot topic, and understanding the current status of each island’s terrestrial areas is critical in both sustainable land development as well as implementing conservation and restoration strategies moving forward. The report ends with five recommendations to works towards a more effective terrestrial nature management on the island: establish a protected areas network, control of roaming livestock, protection of endangered plant species, an invasive species action plan and long-term vegetation monitoring. Findings of this report point to the importance of protecting and connecting rare and individual landscape units, such as those found in the Low Lands and at the remaining naturally vegetated beaches. It is also clear that the landscape ecological units that are characteristic of the high hills have a high conservation value that call for protection.

For more information, you can read the full report here