Corallita dominates roadsides, infests entire neighborhoods, and has sullied otherwise ecologically varied landscapes. Corallita has been steadily expanding its range in the past two decades, and is an increasing threat.

The objective of this study was to create a current map of the distribution of Corallita on St Eustatius as of November 2014. This map could then be compared to the 2007 map to see whether the amount of Coralllita covering the island has increased, determining the locations where Corallita has spread the most, and determining why those areas are particularly favorable for Corallita growth. 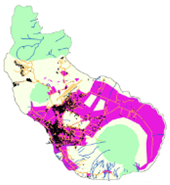