Willemstad – A group of engaged teens and young adults had the opportunity to discuss youth engagement in nature conservation and nature education during the Youth and Nature Education Symposium organized by the DCNA as part of their annual convention.

One of the priorities for DCNA and its member organizations is to engage the youth in their work of safeguarding nature in the Dutch Caribbean. After a successful Junior Rangers Exchange held during the DCNA convention of 2019, the expectations for this year’s symposium were high. DCNA chairlady, Mrs. Hellen van der Wal firmly believes that “the younger generation has a future today. They have a voice, and we should listen more to them”. The youth symposium that recently took place during the DCNA convention focused on nature education and the 2030 Agenda. A total of seventeen participants between the ages of fifteen and twenty-three had the opportunity to strategize and discuss how they would like to see nature conservation develop on their islands, how they would like to see their governments committing more to nature conservation, and how they see their lives and livelihoods impacted by climate change. 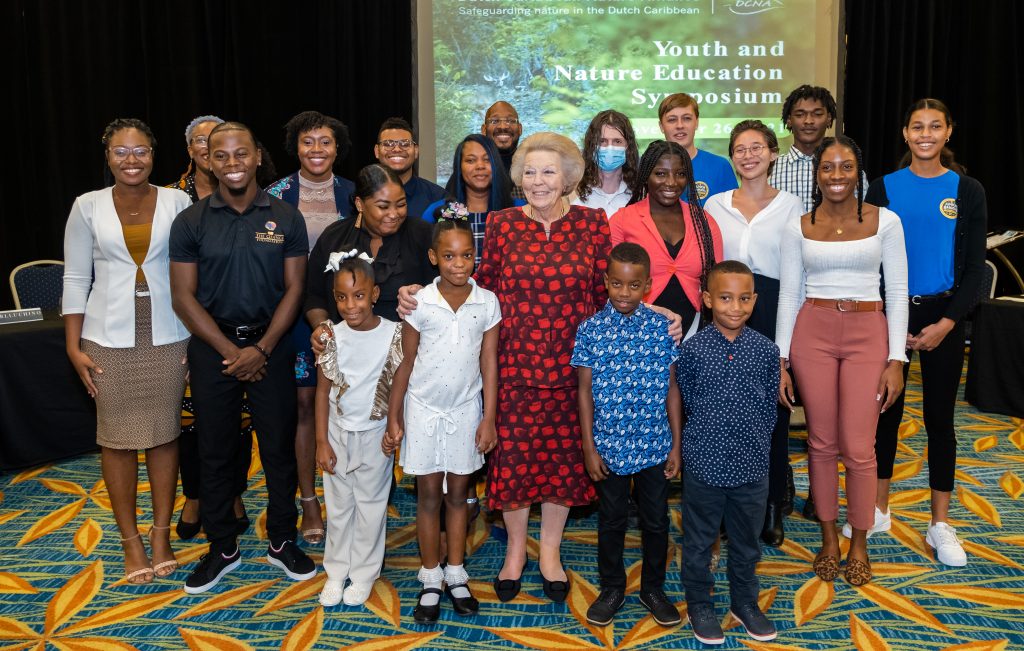 Before discussing the topics at hand and preparing the conclusions, the participants went through a preparation stage that lasted three months. They learned more about the environment in general, the Sustainable Development Goals and further developed their debating skills. The specific topics that they prepared to discuss were the environment in general, life under water, climate change, and nature education.

The participants were welcomed by Sietske van der Wal, representing Aruba National Parks Foundation. The keynote speech that followed was delivered by Dahlia Hassell-Knijff, projects officer at DCNA who started her career in nature conservation as a Saba youth ranger since the age of seven. After a keynote conversation led by Mr. Elton Villareal, the youth participants got the opportunity to present their conclusions to Her Royal Highness Princess Beatrix of the Netherlands, patron of the DCNA.

There was marked interests amongst the audience for the various perspectives brought forward by the participants. They came up with three propositions: an awareness campaign, a movement to clean up the island on a weekly basis (‘Cleaning Sundays’), and a youth council for matters regarding the environment.

Mr. Tadzio Bervoets, director of the DCNA, wrapped up the afternoon concluding that “the future of nature conservation looks exceedingly bright”.

“The youth is generally very eager to learn and after witnessing today’s discussions and presentation, we are particularly driven to prepare an inspiring and educational program for them next year.”, says Achsah Mitchell from St. Eustatius National Parks.

The next official engagement with the youth will take place in March 2022 in St. Eustatius.

More information about the Youth Symposium can be found on DCNA’s Facebook page: DutchCaribbeanNatureAlliance