In this research benthic habitats of the Saba Marine Park were mapped. There were several reasons for an updated benthic habitat map: (1) to compare the current situation to the baseline study carried out in 1992 and identify habitat changes in the past 21 years; (2) to review the zoning plan of the Saba Marine Park for which an accurate habitat map is required to identify suitable zones for marine reserves, anchoring, diving and fishing; (3) to support stratification in fisheries research such as lobster, conch and fish population studies; and (4) to produce value maps as part of the economic valuation study currently taking place on Saba and Sint Eustatius (What’s Saba and Sint Eustatius Nature Worth?) for which habitat maps are necessary to assign monetary value at a spatial scale.
The research questions answered in this study were: (1) which benthic habitats are located where; (2) what are the rough species compositions in these habitats; and (3) what is the structural complexity in these habitats.
Data were collected from video images made with a HD camera, which was dropped from the marine park boat at 276 sample sites. A 150x150m grid was used to select sample sites at regular distances from the shore to the outer boundaries of the marine park. During data analysis three substrate types (sand, rubble and rock) and six benthic species groups (macro algae, sargassum, sea grass, corals, gorgonians and sponges) were identified and percentage coverage of these substrates and benthos were estimated. These percentage coverage were used to classify the samples into ten habitat types according to a pre-defined quantitative classification scheme based on the classification scheme of Caribbean coral reefs by Mumby PJ and Harborne AR (1999)
The resulting habitat map shows that of these ten habitat types only 7 occurred on Saba: bare sand, bare rock, diffuse patch reef, dense patch reef, coral reef, sea grass beds and algae fields. Sargassum fields did not occur, as this species of algae was not found on Saba. Gorgonian reef did not occur, although gorgonians were commonly present at other habitat types, i.e. patch and coral reefs. Bare rubble habitats did also not occur.
Besides the benthic habitat map, two other habitat maps were produced. A reef habitat map including the current zoning plan was produced to compare the zoning system of the Marine Park with the reefs identified in the study. A sand habitat map was produced to further specify the large number of sand habitats in two: bare sand and sand covered with algal and/or cyanobacteria mats. The sand habitat map revealed that sand habitats covered with algal and/or cyanobacteria mats were present around the entire island further ashore, of which the majority was at 30-50 meter depth 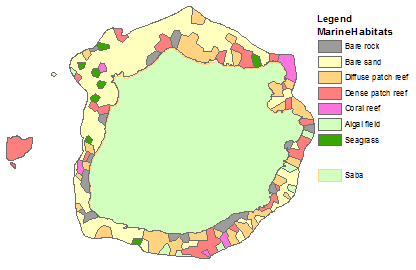 See this report for more info.