This document can act as a guideline in the field. It can be used to check back on the exact methodology for each of the measurements. It is a part of the monitoring protocol developed by BonBèrdè for STINAPA. All necessary information to perform the fieldwork should be here. It is therefore advised to bring this document in the field every time while conducting the fieldwork. This field guide contains different steps, alongside other necessary information. Step A-B includes the activities for setting up the sample plots in the field. As the sample plots for this monitoring study are permanent, meaning they will be visited repeatedly, these steps do not have to be included in any consecutive years of monitoring. Steps 1-3 consist of the steps taken in regard to the measurements of the different factors. These steps are the actual data collection and form the main part of the monitoring. This monitoring location is in the Washington Slagbaai National Park (WSNP). 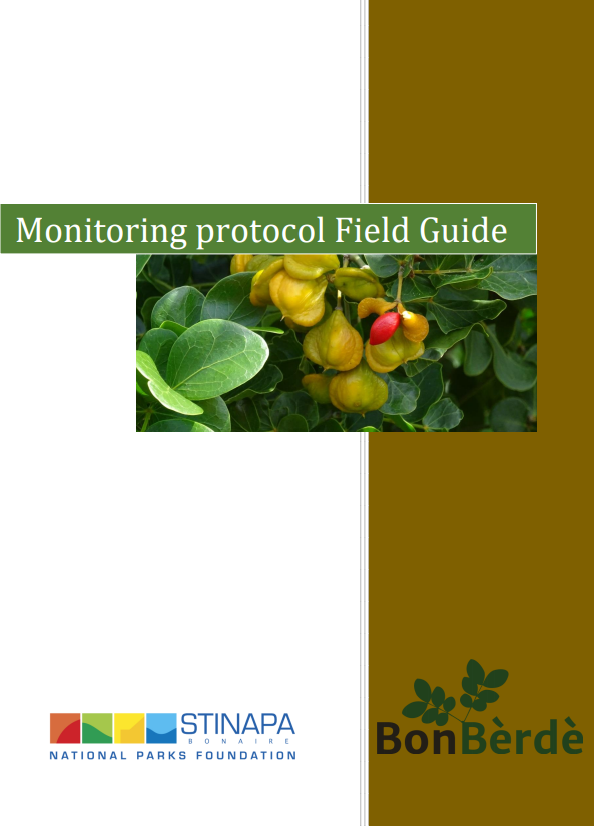 This document contains the written guidelines of the monitoring project in the Washington-Slagbaai National park of Bonaire. These monitoring guidelines are a product of BonBèrdè, an independent consultancy business focussed on nature conservation on the island of Bonaire. This document is requested by and written for STINAPA. The monitoring protocol will consist of a background information paper that includes all general information about the protocol as well as factors to be studied in the field. This is the Monitoring protocol. In addition to this document, a field guide is provided. The Field guide can act as a quick check in the field which will provide fast guidelines to the exact measurements of the monitoring itself.

As STINAPA is currently aiming to remove invasive herbivores from the Washington-Slagbaai National park, the goal of the monitoring project is to assess the current state of the ecosystem inside the park and keep measuring the possible changes over time, following the gradual removal of these animals. With the removal of invasive herbivores, the ecosystem viability is expected to increase and result in a positive succession and regeneration of native trees. However, these expectations will have to be measured in order to prove the necessity of invasive species management. The monitoring protocol can provide STINAPA with the tools to measure the changes in the park over time, using indicators of the possible regeneration. These indicators include:

The monitoring protocol will include the exact indicators and factors that can be measured to assess the ecosystem's succession over time. Furthermore, the field guide will provide STINAPA with the manual on how to execute the monitoring in the field. All the methods and proposed actions in these documents are focused to achieve the best results while taking into account that the methods should be practical to implement and replicate by STINAPA personnel. 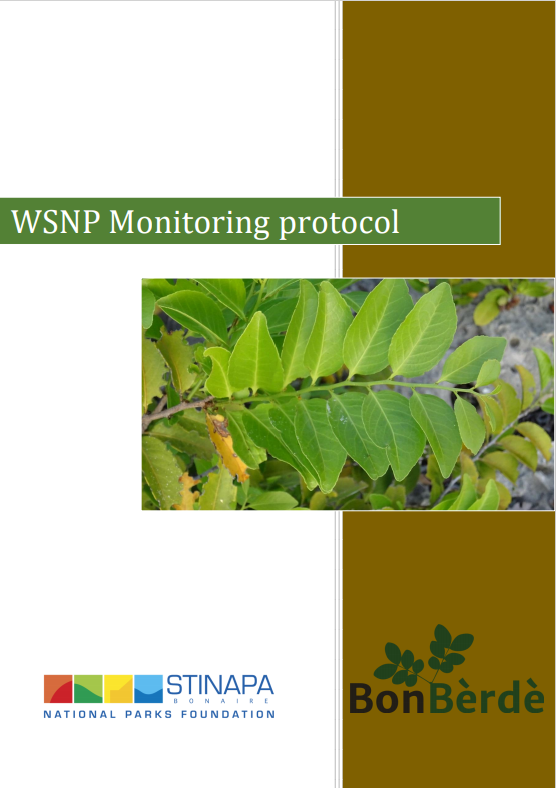 The Bonaire National Marine Park was first established in 1979. It surrounds the island of Bonaire and includes the satellite island and the waters around Klein Bonaire. Bonaire lies in the Southern Caribbean approximately 100km (60 miles) north of Venezuela and 12’ north of the equator. Bonaire is unusual in that it is a true oceanic island, separated from the South American mainland by a deep water trench. Bonaire is part of the Kingdom of the Netherlands and is regarded by the European Union as an Overseas Territory. The marine park falls entirely within the territorial waters and jurisdiction of the Island of Bonaire and is protected by the Marine Environment Ordinance (A.B 1991 Nr.8). The marine park was declared a National Park by the Central Government of the Netherlands Antilles in November 1999. For issues related to World Heritage, Ramsar wetlands, threatened and endangered species, migratory species and marine pollution the Central Government Department of Nature and the Environment (MINA) also has jurisdiction.

The marine park includes 2,700 hectares of coral reef, seagrass and mangrove ecosystems and provides habitat for a diverse range of marine species including over 50 species of stony coral and more than 350 species of reef fish. Sea turtles nest on the shores of Klein Bonaire and forage in Lac, a semi enclosed seagrass and mangrove bay located on the islands windward shore. Bottlenose and Spinner dolphin as well as various species of whale can be found seasonally in the seas around Bonaire. Bonaire is regularly visited by migratory birds.

Bonaire has a well deserved international reputation for excellence in the field of SCUBA diving and is routinely listed in the top five destinations for the Caribbean.

The Bonaire National Marine Park consists of the waters around Bonaire from the high water mark to the 200’ (60m) depth contour, the island of Klein Bonaire and its surrounding waters and the mangrove, seagrass and coral reefs of Lac. The park is managed by a local non governmental, not for profit foundation, STINAPA Bonaire which has a co-management structure with stakeholders, conservationists and local interest groups represented on the Board. The day to day management is carried out under the supervision of a Director but the Marine Park manager, Chief Ranger and Rangers employed by STINAPA Bonaire.

The marine park is managed predominately for biodiversity conservation, the promotion of sustainable use and for the protection of cultural and historical sites within the park with the aim of providing protection for the island’s unique marine resources whilst allowing appropriate recreational and commercial use to be made of the park.

This is the first management plan for the Bonaire National Marine Park. Rapid changes in management over the past six years have highlighted the need for a strategic document to guide management decision making and to better define the mission, goals and objective of the park. It is also a prerequisite for Bonaire’s World Heritage Site nomination and essential if the park is going to begin monitoring its own effectiveness.

This document has been prepared in close consultation with STINAPA Bonaire, their management and staff and a considerable number of stakeholders and stakeholder group representatives.

The plan specifies management goals and strategies for the Bonaire National Marine Park related to the park’s mission, which is to conserve and manage the natural, cultural and historical resources within the park, allowing their sustainable use for the benefit of current and future generations. It also identifies the major existing and potential threats and issues facing the park from ecological, social and cultural perspectives and includes substantial input from stakeholders. It is designed to be an adaptive management tool. 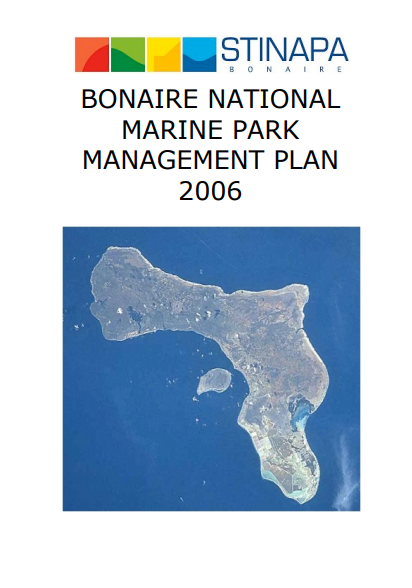 The 12 survey sites lie within the Bonaire National Marine Park, which surrounds the island from the high water mark to a depth of 30 meters. To maximize comparability across the region, GCRMN data was collected solely from forereef habitats at depths ranging from 8 – 15 meters. Sites included the industrialized harbor area along with sites with perceived lower anthropogenic influence on the north and south ends of the island. For each site 5 transects were surveyed. Photographs were taken along the 5 transect lines set for counting fish, capturing 15 images per transect line.

The form is based on material from Eastern Caribbean Cetacean Network (ECCN). See here for the whale stranding fieldguide. Raw data of fish biomass based on the Atlantic and Gulf Rapid Reef Assessment method (AGGRA) for the locations:

Please contact the DCBD admin, or STINAPA for more information.

As pollinators of the typical dry forest cacti, bats are a keystone species. Dry tropical forests are the most threatened type of forest in the Dutch Caribbean due to positioning close to built-up areas. The bats use the many caves as resting habitat. A map of the caves on Bonaire can be found here.

A baseline study on the 9 species of bats of Bonaire (2008-2014) ran across 11 sites and provides information on abundance, sex, weight, size, etc.

The Junior Ranger Program is an out-of-school nature education program run by STINAPA to help teenagers develop knowledge and understanding of nature and to create teenage role models who develop leadership skills, critical thinking and problem solving. They are educated about nature and the environmental problems on the island of Bonaire. The Junior Ranger Program is a complete package of nature education activities where teenagers come in contact with nature and learn by doing through activities that take place within nature conservation programs on Bonaire.

Any of Bonaire’s youth between the ages of 13 and 21 can join the Junior Ranger Program. The Junior Rangers are involved for years and they move up in rank every year. The motivator to join the program is that they have the opportunity to become PADI certified scuba divers. In addition, there is a yearly graduation ceremony where new Junior Rangers are brought into the program and everyone else moves up in rank. All are recognized for their achievements over the past year, for the classes they have attended and the certifications they have earned.