After news was received that the Netherlands Antilles' largest and as yet
almost unspoiled lagoon would be involved in development plans, a
scientific survey was organised for obtaining new data on the present
condition of Lac, Bonaire.
The field work took place between i and 28 August, 1967, by Dr. P. J.
Roos, Amsterdam - who had already studied the coral fauna of Lac
in 1965 - and between 7 August and 23 September by Dr. P. WAGENAAR
HUMMELINCK, Utrecht, who first visited the lagoon in 1930. Roos did
most of the underwater work whereas HUMMELINCK collected biological
specimens from about 60 localities. The survey was initiated by the
Foundation for Scientific Research in Surinam and the Netherlands
Antilles (STUDIEKRING) and was financed by the Netherlands Foundation
for the Advancement of Tropical Research (WOTRO). The material is
being studied in the Zoological Laboratory of the State University at
Utrecht, in cooperation with specialists; most of the results will be
published in the Foundation's "Studies on the Fauna of Curacao and
other Caribbean Islands".
The Lac covers about 8 km^; of this one third is mangrove and shallow
mud flats (Figs. 3-5, 12). The transparency of the water is striking,
compared with that of other inland bays in the Lesser Antilles. Dearth of
nutrients may cause the absence of mangrove-oysters and other mollusks
known to occur in abundance in other mangrove lagoons, and also the
scarcity of balanids and other animal species which are common in
similar Caribbean environments.
Lac is separated from the sea by a barrier of coral debris; a shallow
flat of white sand occurs inshore (Figs. 3-4, 5, 12). The basin has vast
7"Aa/assj'a flats, whose shallower parts may be very muddy, often with
abundant Ha/twerfa. Syrtngorfjum grows near the entrance of Lac and
in other sandy areas. .4uraiwwV/ea is common in several inlets, where it
may grow in profusion. i?w/>£ia is found in creeks and ponds of high
salinity. .Di/j/an/Wa has been collected only once (Figs. 7, 12, 52).
More data on the fauna and flora are shown in Figs. 8-11. The distribution
of the small form of Afe/ongena we/ongena appears to have been
much larger some 30 years ago. CAfowe cawee/Za/a was not found in Lac
recently but it was abundant a few thousands years ago when the lagoon
extended further inland (Figs. 11, 51). It is likely that the fauna of Lac
has become poorer in recent times. The big heaps of S/tt>m6«s £tgas have
not visibly increased in size during the last thirty years (Figs. 8, 35-36).
During the last century the landscape has changed considerably.
Formerly the broad sandy barrier which separates the basin from the
mangrove-flat in the north (Figs. 12, 17-18, 24, 26, 46-47) had several
large openings through which the water could circulate. Afterwards part 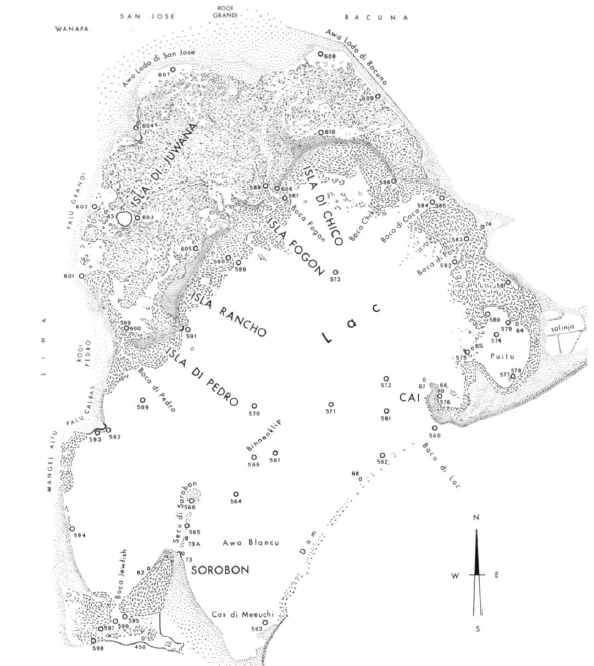