Coastal bathymetry of Bonaire from 0 to 20 meter depth at 2x2 meter resolution. 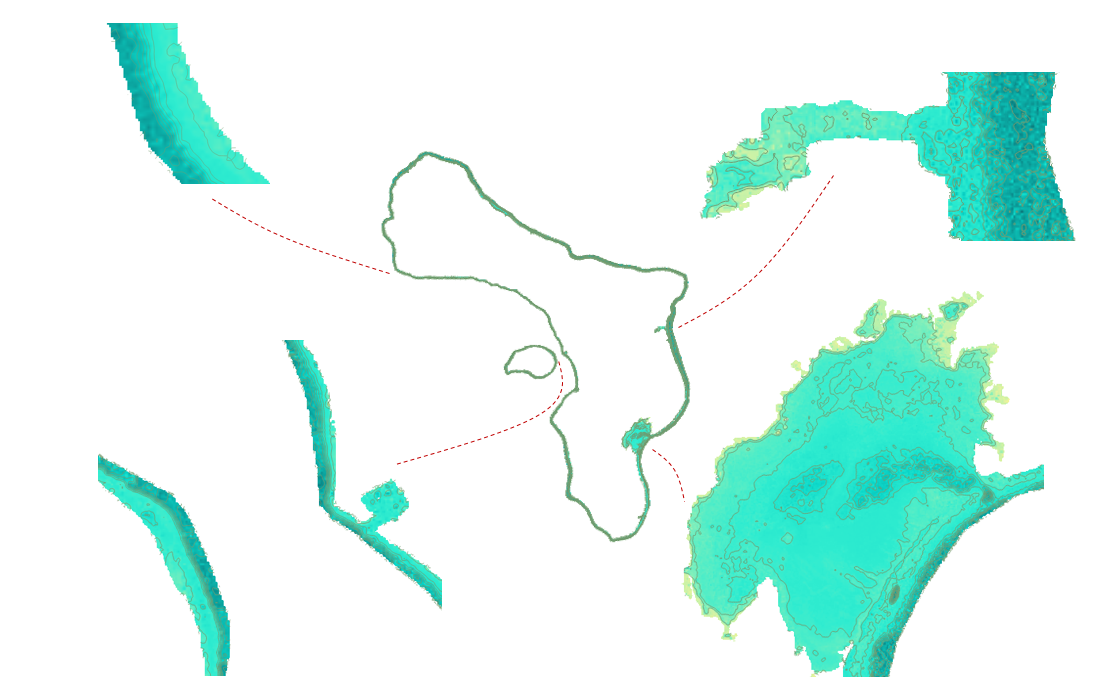 Original point data was captured at a 500 meter interval at 5 meter depth (shallow) and at 10 meter depth (deep). This GIS polygon layer contains: 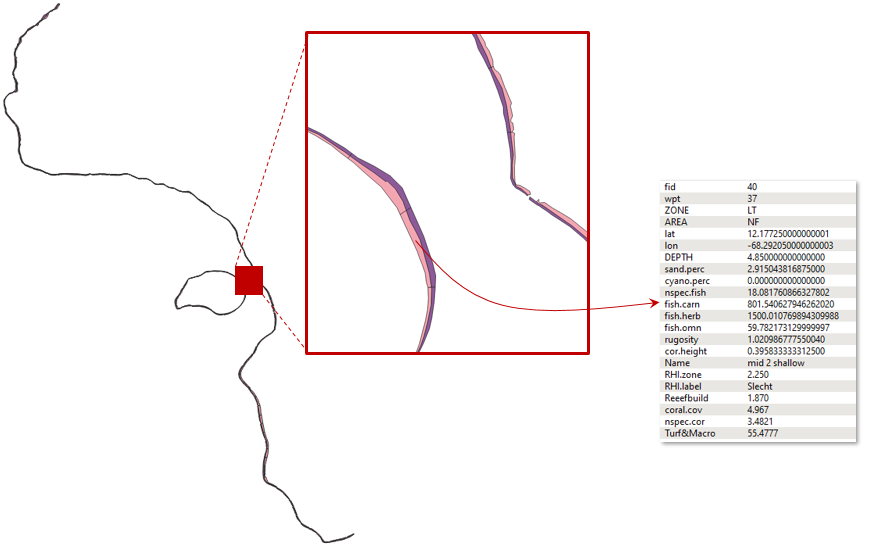 Coral reefs are rapidly degrading worldwide, due to  a combination of global and local stressors. While gloal stressors, such as ocean warming, cannot be managed, management of local stressors can increase the resilience of coral reefs to these global stressors. One such local stressor is overgrazing- induced terrestrial erosion causing sediment and nutrient run-off to coastal waters, which is associated with coral mortality and changes in benthic community composition. In this study we assessed the link between watershed-specific erosion hazard and coral reef health, using the coral reefs on the west coast of Bonaire, Caribbean Netherlands, as a case study. We first identified watersheds, waterflow and run-off sites into the sea based on a digital elevation model. Next, for each watershed we determined the mean erosion hazard (a proxy for the degree of terrestrial run-off based on slope and ground vegetation cover). Subsequently, we used multiple regression models to investigate whether mean erosion hazard of the nearest upstream watershed, and distance to the nearest upstream run- off point explained variation in marine benthic community composition at two depth zones (~5 m and ~10 m). We found a negative relationship between mean erosion hazard and coral cover (a proxy for coral reef health) at 5 m depth, but no such effect at 10 m depth. In addition, we found a positive relationship between mean erosion hazard and sand cover (a proxy for sediment run-off) for both depth zones, and a small but significant quadratic effect of mean erosion hazard on algae cover (a proxy for nutrient run-off) at 5 m depth. Moreover, distance to the nearest upstream terrestrial run-off point was positively related with coral cover at 10 m depth, and negatively related with sand cover at 10 m depth. Our results provide direct evidence for a negative relationship between watershed-specific erosion hazard and coral reef health, and highlight the need for a nature-inclusive “watershed-to-reef” based coastal management approach that integrates terrestrial and marine conservation to preserve the island's valuable coral reef and related ecosystem services.

including: Habitat maps of the benthic communities of Sint Eustatius, Caribbean

This report is part of the CARIPES project

A Commentary on
Managing Recovery Resilience in Coral Reefs Against Climate-Induced Bleaching and Hurricanes: A 15 Year Case Study From Bonaire, Dutch Caribbean

A closer look at the methods of Steneck et al. (2019) reveals two issues of concern in making comparisons between the authors' estimate of coral cover and other published estimates.

The Saba Bank is a large (ca 2400 km2 ) submerged carbonate platform of 15-40m depth rising up from 800-1000m depth and fringed with coral reefs. It extends into a carbonate peninsula of ca 80m deep (Luymes Bank) which is pockmarked by sinkholes. More than twenty drowned sinkholes were distinguished in this peninsula based on available bathymetric data. Diameters of sinkholes vary from 70 to 1100 m and depths ranges between 10-300m. The area of the Luymes Bank with sinkholes is ca 66 km2 . During the NICO cruise in 2018 two sinkholes were visited in the Luymes Bank. In one of the two shallow sinkholes, which were only briefly explored with camera’s in 2018, we found peculiar pillar-like, probably calcium carbonate accretions with diameters of 40-60cm and protruding up to 1m from the sandy bottom. Pillars were found to stand neatly ordered on the bottom at a depth of ca 110 m. Based on the pink color on top, pillars look like features formed by crustose coralline algae of unusual size and density, almost in a stromatolitic fashion. In the second sinkhole such pillar-like structures were not found. Very little is known about these structures, their distribution and the conditions under which they are formed. Moreover, no information is available of the benthic communities and environmental conditions in the very deep sinkholes of more than 150m m depth. Therefore, the sinkhole expedition was completely dedicated to the sinkholes and the platform in which they occur (Luymes Bank).

The aims of the expedition were:

In order to update the 1985 atlas of Bonaire’s coral reefs (Van Duyl, 1985), a hyperspectral mapping campaign was performed in October 2013 using the Wageningen UR Hyperspectral Mapping System (HYMSY) with 101 spectral channels. In June 2016, with the help of STINAPA Bonaire, Sander Mücher and Erik Meesters were able to perform an extensive diving campaign to collect in-situ information in 20 transects perpendicular to the coastline across the western coast. Detailed photographs of the sea bottom were taken by diving to a depth of 20-30 meters, then progressing shallower towards the coast. Photographs were geotagged by another person snorkelling exactly above the diver with a GPS in a waterproof box and making overview pictures of the sea bottom as well. Due to the limited penetration of green and red light through the water, it was decided to use only the first 15 hyperspectral bands in the violet-blue -cyan till green range (Band 1 = 450.0 nm to Band 15 = 520.0 nm). This means that spectral measurements can be made to a maximum depth of 20 to 30 meters. The hyperspectral reef classification defines 12 classes including sand, pavement, rubble, soft and hard corals, and various mixtures of these at a pixel level of 1-meter spatial resolution. Due to their spectral similarity, corals and algae remain difficult to separate.