Bonaire is rich in natural terrestrial ecosystems ranging from dry tropical forest, caves and beaches to salt lakes and mangroves. These ecosystems provide a wealth of ecosystem services to Bonaire's population, including food provisioning, recreation opportunities for tourists, cultural heritage and habitat provisioning. A large part of the land is protected in the form of a national park, RAMSAR wetlands, Important Bird Areas and as Key Biodiversity Areas (Verweij and Mücher in Debrot et al. 2017; minLnv 2020).

The interaction of the natural ecosystems with human activities is reflected in the land cover. Understanding current land cover and how the land is being used, especially with regard to the aforementioned challenges, is elementary for land management and land use planning. Measuring current conditions is achieved through land cover mapping. Satellite images are often used as basis for land cover mapping as it allows to take a measured snapshot covering the entire study area at a single moment in time. Multiple images through time can show how the land cover changes over time (Saah et al. 2019).

You can download the land cover data file here. 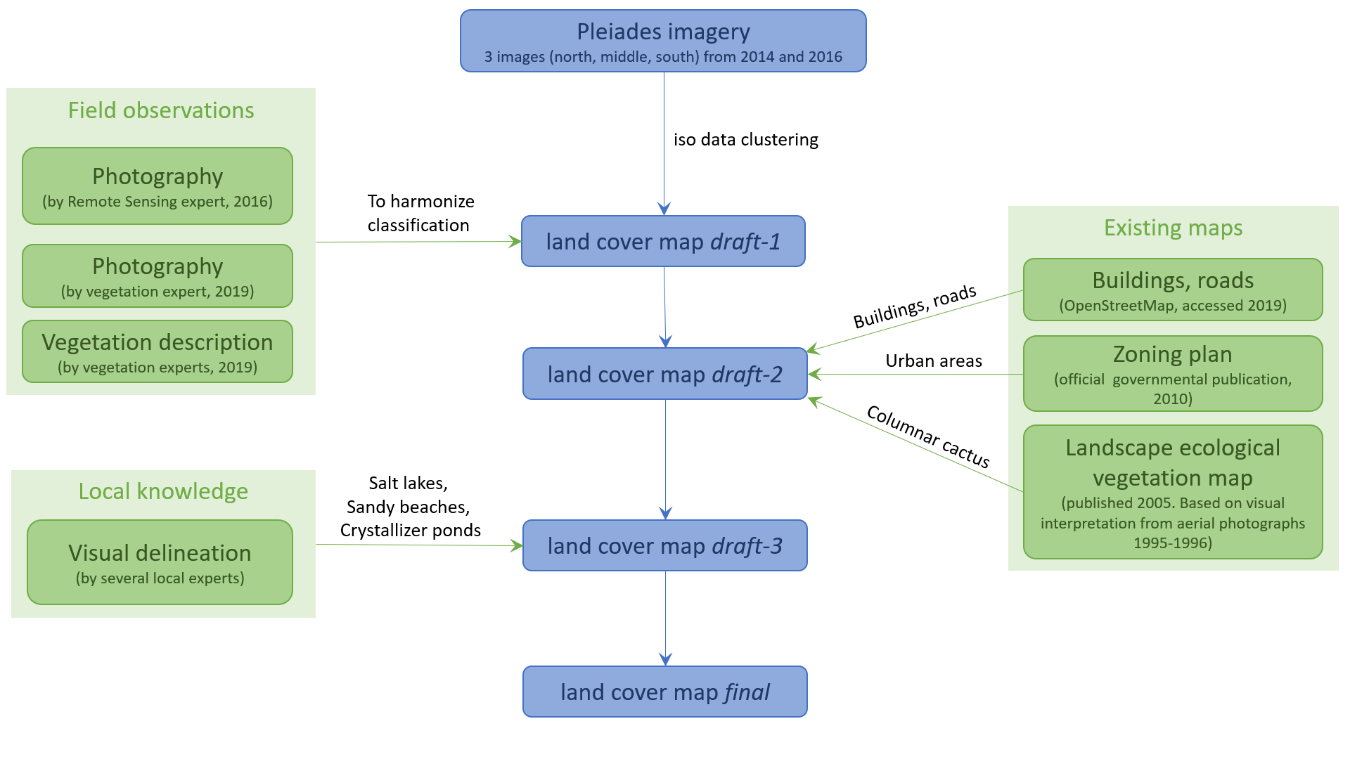 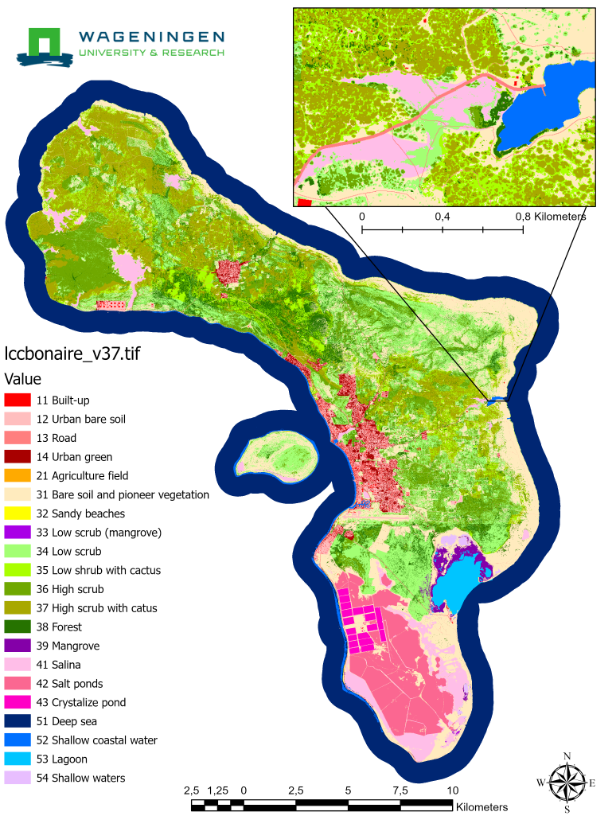 The ASTERDEM has been improved amongst others for making a bathymetric model and for that reason the ASTERDEM was converted to contour lines, and to improve the calculations extra height points were added for the lowlands of Bonaire, as well as extra measured sea depth points that were collected in a separate campaign to calculate a new bathymetric model that interpolated the improved DEM with the measured sea depth points. 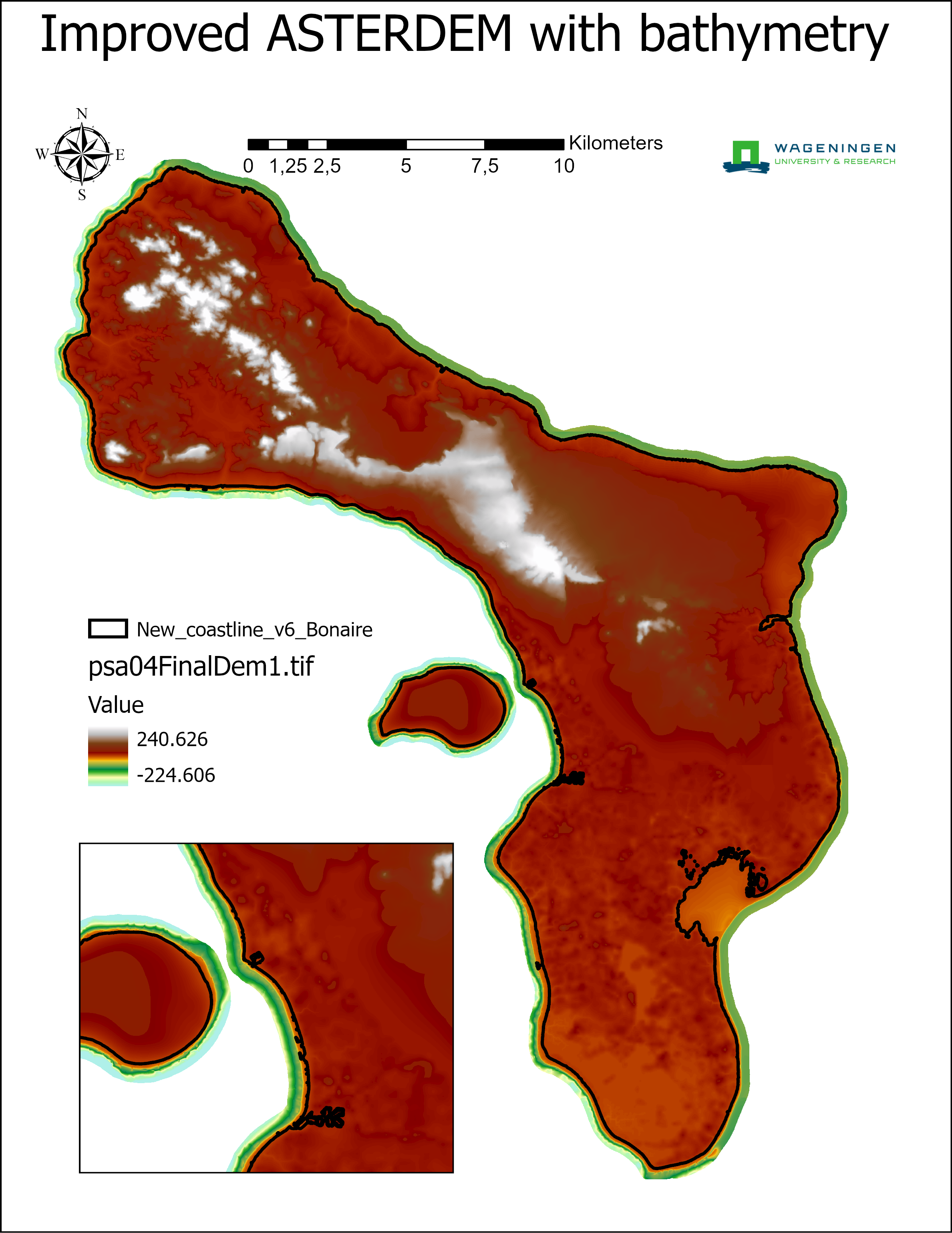 Improved AsterDEM for Bonaire with a 10-meter spatial resolution and 1m height resolution.

The ASTERDEM has been improved amongst others for making a new bathymetric model and for that reason the ASTERDEM was converted to contour lines, and to improve the calculations extra height points were added for the lowlands of Bonaire, as well as extra measured sea depth points that were collected in a separate campaign to calculate a new bathymetric model that interpolated the improved DEM with the measured sea depth points. 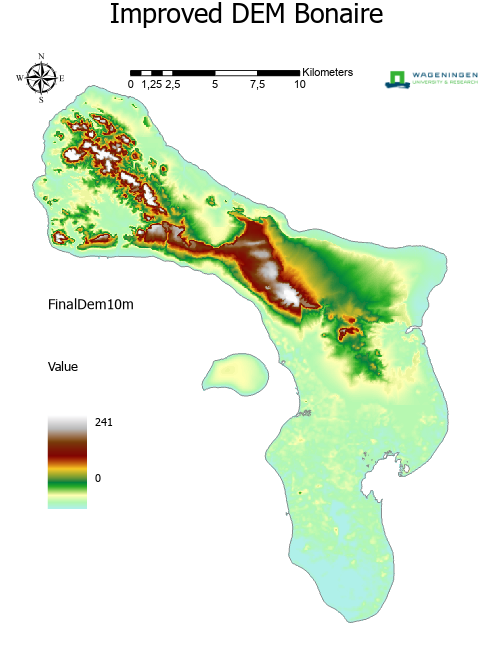 Catchment areas with potential water flows made with ESRI ArcGis hydrology tools using the improved ASTER DEM as an input.

69 watersheds have been identified in the downloadable GIS shapefile. 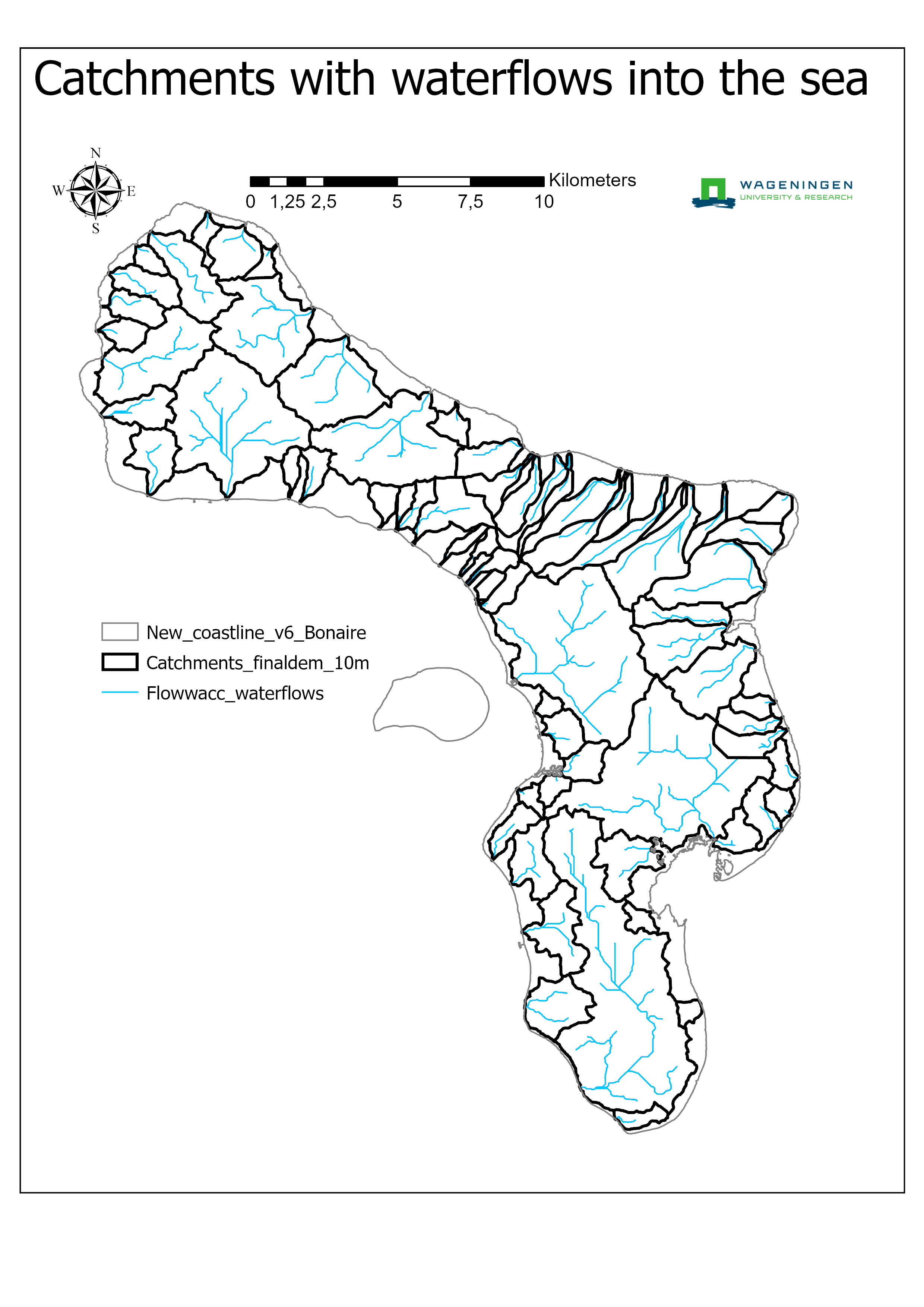 The Dutch Caribbean island Bonaire has protected its marine resources for more than 35 years and has been ranked as one of the Caribbean’s top dive destinations much due to its wide range of easy accessible diving sites, clear waters and relatively healthy coral reef ecosystem. The importance of coral reefs is multifunctional and provides ecosystem services not only to attract tourism and therefore income, but also as a natural barrier to protect the coast, and as a habitat for many species, providing food as well. The general consensus is that the extent and biodiversity of Bonaire’s coral reef is decreasing due to local and regional anthropogenic and global climate pressures. However, the last extensive study of the coral coverage of the reef ecosystem was performed in 1985 by Van Duyl who created an underwater atlas of Bonaire and Curaçao. In order to update this atlas of Bonaire’s coral reefs, a hyperspectral mapping campaign was performed in October 2013 using the Wageningen UR Hyperspectral Mapping System (HYMSY) with 101 spectral channels.

In June 2016, with the help of STINAPA Bonaire, Sander Mucher and Erik Meesters were able to perform an extensive diving campaign to collect in-situ information in 18 transects perpendicular to the coastline across the western coast. Detailed photographs of the sea bottom were taken by diving from a depth of 20-30 meters towards sea level on the coast. Photographs were geotagged by another person snorkelling exactly above the diver with a GPS in a waterproof box and making overview pictures of the sea bottom as well. This in-situ information was used to interpret the hyperspectral imagery made by the HYMSY camera.

The HYMSY camera consists of a custom pushbroom spectrometer (range 450–950nm, FWHM 9nm, ~20 lines/s, 328 pixels/line), a consumer camera (collecting 16MPix raw image every 2 seconds), a GPS-Inertia Navigation System (GPS-INS), and synchronization and data storage units. The weight of the system at take-off is 2.0kg allowing it to be mounted on varying platforms. On Bonaire the system was flown on two platforms: 1) on a Cessna airplane to provide a coverage for whole coastline, and 2) on a kite pulled by boat or car to provide a subset coverage in higher resolution. With the Cessna the whole west coast of the island was mapped. The Aerial images were collected at 150mm ground sampling distance (GSD) and the hyperspectral data in 2m GSD. The data were mosaicked and geo-rectified to form hyperspectral maps of the western and southern coastal area of Bonaire.

In order to interpret the data more consistently, the hyperspectral data were corrected for the water depth into at-ground-reflectance factor units. A bathymetric model was used for the calibration of the hyperspectral imagery based on a former field campaign by measuring water depth at specific locations along the western coast. The final bathymetric model that we used was based on extrapolation of the terrestrial digital elevation model through fitting with additional in-situ bathymetric measurements on sea. A more detailed bathymetric model would of course have been preferred to calibrate the hyperspectral data with a 1 meter spatial resolution. Due the limited penetration of green and red light though the water, it was decided to use only the first 15 hyperspectral bands in the violet-blue -cyan till green range (Band 1 = 450.0 nm to Band 15 = 520.0 nm). This means that spectral measurements can be made to a maximum depth of 20 – 30 meters.

The classification of the hyperspectral data is almost finished and is classified in simple classes such as sand, pavement, rubble, soft and hard corals and various mixtures of these at a pixel level of 1 meter spatial resolution. Examples of the coral reef hyperspectral classification are given below. The new map is freely accessible via DCBD

Coral reef map of Bonaire based on 2013 1x1 meter resolution hyperspectral mapping (101 channels) and a 2016 diving campaign to collect in-situ information in 18 transects perpendicular to the coastline across the western coast.

An RGB composite of the hyeprspectral data can be found here. Very high resolution satellite imagery has been acquired for Bonaire and concerns very detailed ortho-rectified imagery from the Pleiades satellites. The Pleiades satellites were designed under the French-Italian ORFEO program (Optical & Radar Federated Earth Observation) in the early 2000’s. Pleiades 1A and 1B optical sensors provide panchromatic imagery with 50 cm resolution and multiresolution imagery in 4 spectral bands (blue, green, red and near-infrared) with 2m spatial resolution. To obtain cloud-free EO data for Bonaire is a quite difficult task and the final selection of imagery consisted of 3 scenes from different dates: 1) 8th of March 2016 for the Northern region; 2) 3rd of May 2014 for the Central region; 3) 28th of February 2014 for the Southern region.  On basis of these scenes a pan-sharpened mosaic has been created with a 50 cm resolution for the entire island of Bonaire including the coastal marine zone as shown below. This mosaic has also been used to digitize the coastline in more detail. The multispectral resolution data will be used as the basis for a new land cover / land use classification that can be used as a basis for further monitoring and spatial modelling of for example natural habitats and ecosystems and their services.
Please contact the DCBD administratorfor more information.