In 1963, there are three tooth carps species native to the islands: the molly (Poecilia sphenops), one-spot molly (P.vivipara), and guppy (P.reticulata). The local variety of P.sphenops in three islands had been described already in 1887 by van Lidth de Jeude as P. vandepolli (named for its collector, van de Poll). The vernacular name of the local is machuri. In the early 1960s, Constance Feltkamp and Ingvar Kristensen investigated the islands, and later they wrote the article "Ecology and morphological characters of different populations of Poecilia sphenops vandepolli."

Growth of tourism, urbanization, agriculture and road construction generally cause loss of habitats for native species of all kinds. In late 2004, I went to the islands to see what possible impact these factors may have had on the distribution of the local molly, especially on Aruba, due to the growth of tourism there. I found mollies in Aruba at three locations: the wetlands in northwest, at Bringamosa, and Modanza, both close to Arikok National Park; in Curacao at two locations in Willemstad; and in Bonaire at Sorobon. 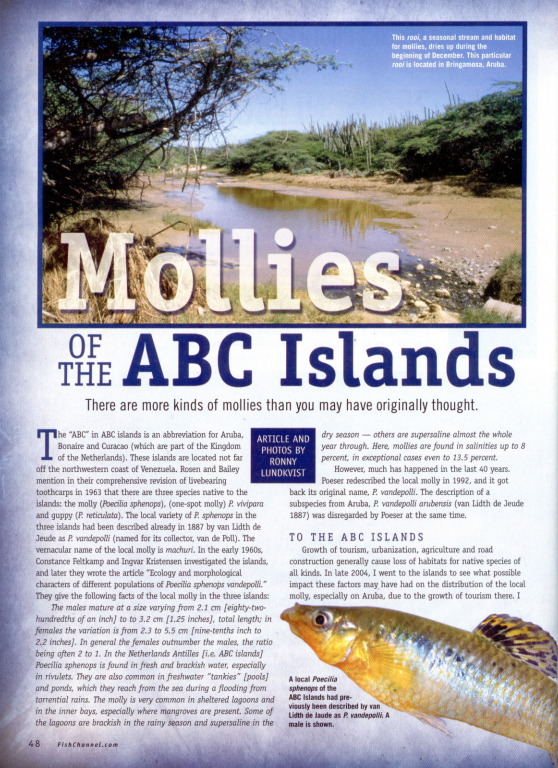 In the June 2005 issue of Lundkvist wrote about the habitats of Poecilia vandepolli in Aruba, Bonaire, and Curaçao (“Orange Tail Mollies in Dutch Waters?”). He also expressed his view of the conservation status of the species. Having kept this rare molly in captivity since December 2004, he shared his experience. The species seems to vary considerably as to pigmentation, also within a population. Some males have a shoulder blotch that is more or less faint, while others display black marks instead in the same place, especially when courting. Among the 22 specimens that he collected as tiny fry at the beginning of December 2004, five had developed a gonopodium (i.e., had become males) by May and June. Poecilia vandepolli is a very active species and demands plenty of space, but a 20-gallon tank will do for about 10 specimens.

Have you ever seen an orange tail molly in Dutch waters? If not, you should go to the ABC Islands. That’s an abbreviation for Aruba, Bonaire, and Curaçao. These islands are located not far off the northern coast of Venezuela. In the small Antillean islands (i.e. the ABC islands) the population of mollies in the sea is small, probably because of the multitude of predators. However, this small population seems to be of utmost importance as it is a very stable one, in contrast to the populations of inland waters, both fresh and super saline (i.e. landlocked saltwater lagoons), which habitats seem to be more attractive than the sea. In the inland waters, however, mass mortalities occur of adverse conditions, both biotic and of abiotic nature. Therefore the inland populations are subjected to occasional extinction, and the habitats have to be repopulated from the sea. This may be the explanation that no genetically fixed differences could be found between populations from freshwater, from the sea and from super saline water. The inland migration after rainfall is not caused by the freshwater itself, but by an organic compound that is found in inland water, whether fresh or saline and also in rainwater after it has been in contact with the soil. So the next time you want to go scuba diving, snorkelling, or bird watching, why not choose the ABC islands? They are friendly, safe, and clean, and you can even drink the tap water! But do not forget to look for the local molly: Poecilia vandepolli. 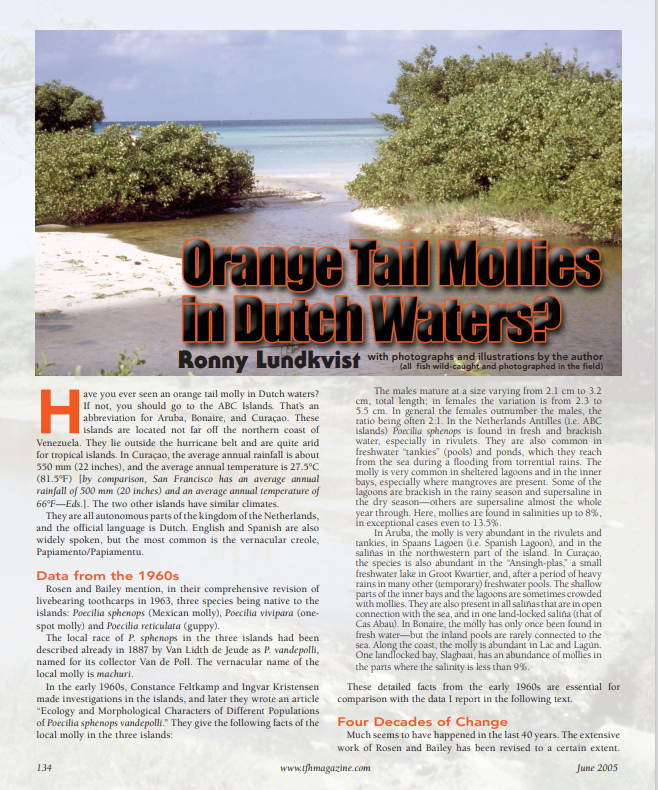