The distribution is presented in 1 km-grids, based on vegetation relevés and digitized data from herbarium specimen, photos, literature and field surveys. Releves date back to 1880. 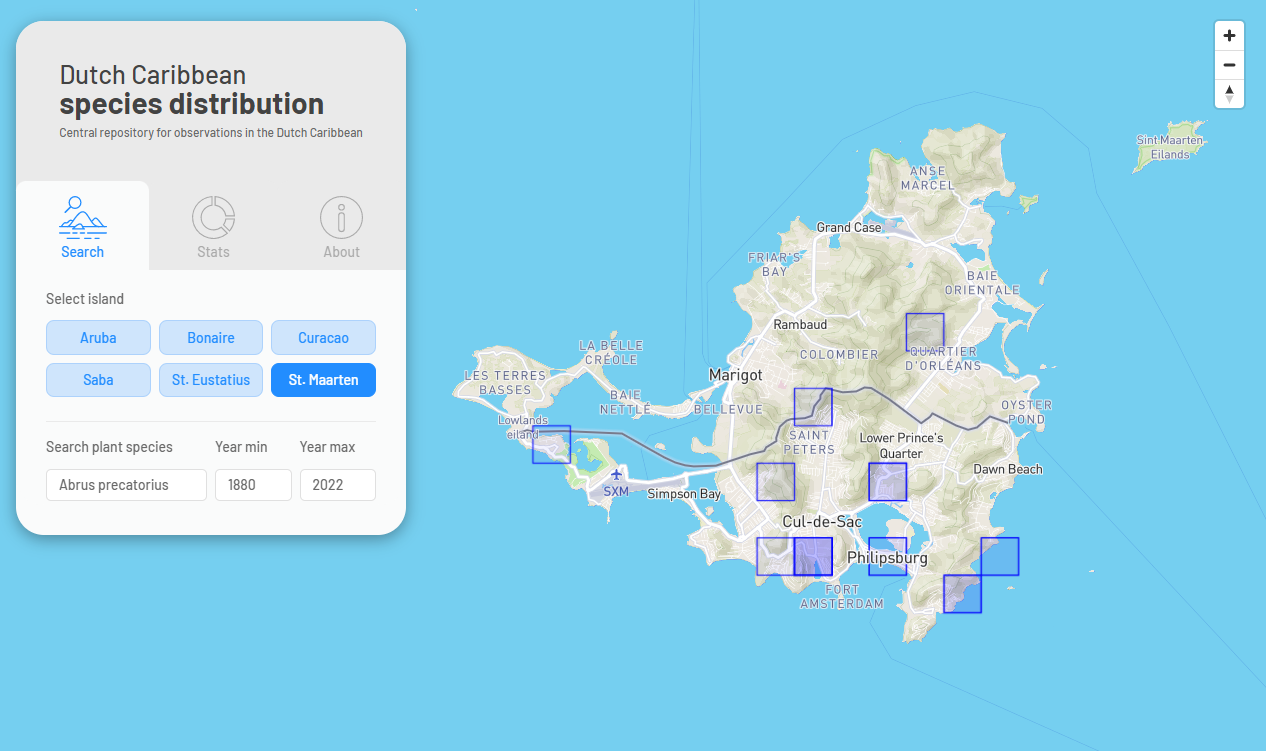 Vegetation maps are a primary and essential tool in biodiversity science, conservation, management, and monitoring as well as in land-use management planning. In this study a semi-detailed landscape-based vegetation map (scale: 1: 46,000) is presented for the 34 km2 Dutch half of Lesser Antillean island of St. Martin (St. Maarten). A vegetation map is especially critical in biodiversity context as St. Maarten lies in a key biodiversity hot spot and is habitat to more than 100 regional endemic animal and plant species of which 12 are island endemic species found only on St. Maarten. The map is based on a total of 56 vegetation plots that were sampled in 1999 using a stratified random sampling design and analysed using TWINSPAN cluster analysis. Two hundred and twenty (220) plant species, representing 40 % of the total known flora (544 species), were recorded in the sample plots.

A total of four main and eleven different sub-landscape types were distinguished based on geology, geomorphology and the eleven distinguished vegetation types. The most dominant landscape type was the hilly landscape type for which seven sub-landscapes were distinguished. The 11 vegetation units we describe represent an important decline from the 16 vegetation types distinguished by STOFFERS (1956). Large changes have clearly occurred in the coverage and composition of the vegetation types of the island. Between the early 1950s and 1999 the total coverage of vegetated areas in St. Maarten declined from 67% to 42% representing a loss of 25% of the total vegetated surface of St. Maarten. Five of the vegetation units of STOFFERS (1956) have disappeared beyond recognition. These are: Hippomane woodland, Vegetation of the salt flats, Strand scrub community, Littoral woodland and Vegetation of the rock pavement. While Hippomane woodland has in part likely been lost due to hurricane impacts, most vegetation loss and degradation has been due to massive urbanization and touristic development especially in the lower and coastal parts of the island. As a consequence the vegetation types of the higher and steeper sections of the island have remained among the least disturbed and degraded. Some vegetation units described by STOFFERS (1956) have also disappeared due to actual vegetation regeneration and succession to a more diverse state due to the decline in agriculture and livestock grazing. Goat grazing remains especially high in two of the eleven vegetation types we described (50 – 80 % presence of dung in the study plots). The highest goat presence was recorded in a “new” vegetation unit (type 6) that has developed based on the domination of the invasive plants Leucaena leucocephala (jumbie bean, lead tree) and Antigonon leptopus (coral vine).

The main threats to the vegetation of St. Maarten we discern based on this mapping project are 1) the massive scale of urbanization and touristic development the island has undergone, 2) continued uncontrolled livestock grazing, 3) invasive plant species, and 4) hurricane impacts. Unless actions are taken to stem the loss of and help restore natural vegetations, we predict that the island will continue to lose its plant diversity, and along with it the fauna which depends on that vegetation. Continued loss of natural vegetation will further exacerbate erosion, loss of freshwater, soil quality and 5 environmental resilience to climate change, as well as sedimentation in the marine environment and the concomitant loss of shallow marine habitats like seagrass beds and coral reefs.

This report describes a field visit to the Caribbean island of Bonaire aiming at collection of field data on the arid vegetation, which consists largely of dry thorn scrub, cactus scrub and dry tropical forest. Vegetation releves have been amde at 23 sites, among which eight sites that have been surveyed in 1999. Besides 50 short field descriptions have been made as a basis for a land-use map. The report describes how the more than 1000 releves of the Dutch Caribbean islands, which are stored in the vegetation database CACTUS, may be analysed to provide insight in natural processes like vegetation succession and effects of land use, climate change and other factors. Besides, the report contains an advice for the representative Ministry of Agriculture, Nature and Food Quality on the island about the (better) conservation of sites on the limestone terraces with very well developed woodland. 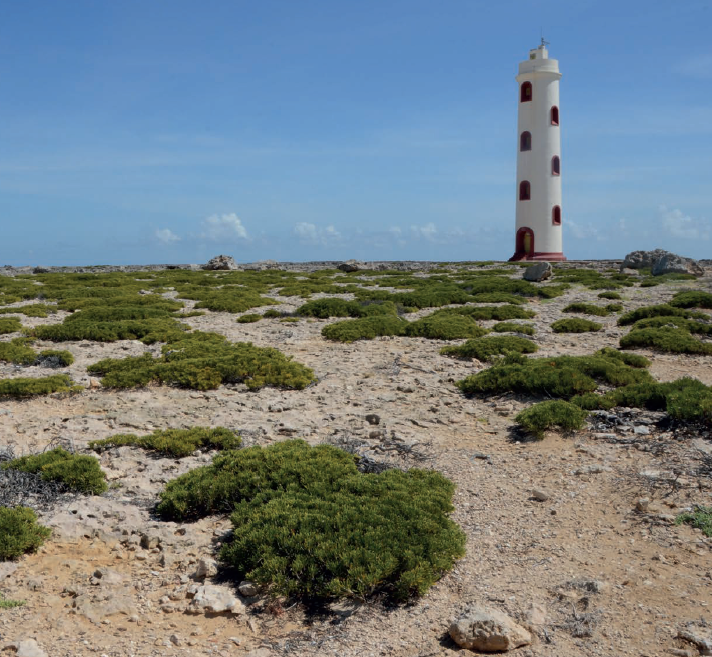 The roughly 300 locations were digitized from paper field forms (1999).

Caribbean coral reefs have been declining for decades due to a combination of anthropogenic drivers and natural phenomena like hurricanes. The degradation of coral reefs is characterised by, among others, a decline in coral cover, a decline in apex predators (e.g. sharks, large groupers and snappers), a decline in invertebrates (Diadema), and an increase in macro-algal cover. In the past 40 years large-scale shifts from coral-dominated to macro-algal-dominated reef communities have occurred throughout the Caribbean.

Healthy coral reef ecosystems and sustainable coastal fisheries are of utmost importance for the small island economies of Bonaire, Saba and St Eustatius. Bonaire (288 km2) is located in the southern Caribbean and is surrounded by the Bonaire National Marine Park (BNMP) which was established in 1979. The BNMP starts at the high-water mark and extends to 60m depth, covering an area of 27 km . In 2008 two fish reserves (no fishing allowed) and two dive reserves (no diving or snorkelling allowed) were established. In this report we document the 2014-2015 status of the coral reef fish stocks, the coral reef fisheries and the coastal pelagic fisheries. Where possible the current status and trends will be discussed in a historical and wider geographical (Caribbean) perspective.

Quantitative habitat mapping and description form the basis for understanding the provisioning of ecosystem services and habitat connectivity, and hence provide an essential underpinning for marine spatial planning, management and conservation. Based on 869 video stations in a 150 x 200 m grid, we mapped 25.3 km2 of the near-shore island shelf of St. Eustatius at depths ranging 5-30 m. This yielded a coarse-grained map of the principal habitat classes of St. Eustatius’ seascapes. A total of nine principal seafloor habitats were distinguished. Gorgonian reefs amounted to 22% of the Statia Marine Park habitats sampled and were concentrated in the shallow wave-exposed eastern parts of the island (7.7 m average depths). The densest coral “scapes” and seagrass beds of St. Eustatius were concentrated at depths of about 24 m and only amounted to 4 and 5 percent resp. of the island shelf habitats studied. Whereas coral areas were essentially limited to the southern and south-western island shelf areas, seagrass beds were confined to the northern island shelf area. Including patch reef habitats, total hard coral-scape habitat for the St. Eustatius Marine Park amounted to about 19% of the area surveyed and about 475 ha of habitat. Sargassum reef habitat typically occurred at the seaward edge of communities dominated by hard coral growth.