Caribbean flora and fauna have always coped with the destructive forces of hurricanes. However, climate change leading to an increase in their frequency and strength, and because many species have declined in abundance due to anthropogenic causes, a better understanding of how hurricanes effect local populations is essential. 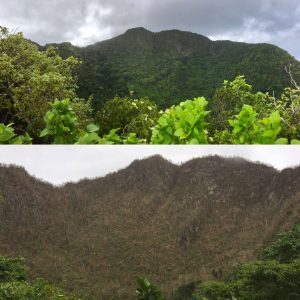 The Quill before and after Hurricane Irma. Photo credit: Hannah Madden

The 2017 Caribbean hurricane season was the most intense recorded to date. Both Irma and Maria, category-5 hurricanes, closely passed Sint Eustatius and caused major destruction on the island; reported in this Nature Today article. Although immediately after the storms it was clear that trees were heavily affected and mostly defoliated, understanding which species were affected and to what extent requires time for data collection and comparison. Since 2017, several studies have provided pieces of information in order to understand how local populations coped, or not, with the 2017 hurricane season.

Since 2017, researchers found that >90% of all trees were defoliated by more than ¾, and that especially trees at higher elevations (such as on the Quill volcano) were affected more severely. Another study that focused on the Bridled Quail-dove (Geotrygon mystacea), demonstrated that the population declined by 77% in 2019 compared to pre-hurricane levels. A follow-up study in 2021 (not yet published) recorded a further decline to just 125 individuals, and the Bridled Quail-dove will likely be re-assessed by the IUCN.

Focusing on reptile species, a novel study further aids our understanding of the ecosystem-wide impact that the 2017-hurricane season had on Statian biodiversity:

The new study, focusing on the Critically Endangered Lesser Antillean iguana (Iguana delicatissima), shows that its population decreased by at least 20% during 2017. Comparing sighting and survey data from 2017–2018, the authors found a decrease in both the occupancy and population size of the iguana species. Importantly, no recovery was observed in 2019, suggesting that this already small population needs multiple consecutive years without major hurricanes to recover. Interestingly, similar to Statia’s forests, iguanas at higher elevations were found to have been affected more severely. 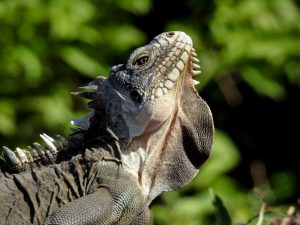 Small islands such as Sint Eustatius are home to declining populations of rare and endangered species. In many cases, these isolated populations are unable to migrate between islands and thus populations can only increase in size locally. These new studies highlight the need to improve habitat quality and lower anthropogenic threats to optimize the natural recovery of these species. Ideally, at least for population increase could be aided by a local head-starting project where baby iguanas are nourished in temporary captivity and released once they are larger and more likely to survive.

You can find the full study here entitled “Hurricane-induced population decrease in a Critically Endangered long-lived reptile” using the DCBD link below.

The Invasive Alien Green Iguana (IAGI), Iguana iguana, has spread worldwide via the pet trade, as stowaways and via other means and has become a pest species of global concern. It also represents a major threat to the endemic Lesser Antillean Iguana, Iguana delicatissima, on St. Eustatius. Following the capture of an adult female IAGI on St. Eustatius in early 2016, we conducted a Rapid Response Removal Campaign (RC) from April 2016 to January 2017. Three sets of directed visual surveys totaling 409.5 observer hours and covering a combined trajectory of 114.2 km realized only a single detection of a hybrid that was later removed. During the remainder of the campaign period, an additional four IAGI hybrids were opportunistically detected and removed thanks to park staff or community involvement. Since the end of the campaign, eight additional detections and removals have been realized, three of which were IAGIs caught while offloading freight in the harbour and five of which were hybrids caught in surrounding suburban areas. We suggest that at least four distinct IAGI introductions to St. Eustatius occurred between 2013 and 2020. Our results show the value of motivating and mobilizing stakeholders and the public at an early stage of an invasion. Since the program’s initiation, eight of the 13 iguanas detected for culling were thanks to public and key stakeholder support and involvement. Four years after our campaign, the number of IAGIs and their hybrids still appear to be limited and concentrated in and around inhabited areas. Additional removal campaigns should be initiated as soon as possible, firmly based in public outreach, motivation and engagement. New legislation is needed to prohibit the importation, possession and harbouring of IAGIs or hybrids and to provide a framework for long-term structural funding required for effective control and removal. Routine fumigation and rigorous inspection of arriving cargo to eliminate the risk of stowaway IAGIs are also recommended. Culling of IAGIs is recommended for the port of St. Maarten, which serves as a major point of dispersal of IAGIs to St. Eustatius and likely also other islands in the region.

Catastrophic events, like hurricanes, bring lethal conditions that can have population-altering effects. The threatened Caribbean dry forest occurs in a region known for its high-intensity hurricane seasons and high species endemism, highlighting the necessity to better understand hurricane impacts as fragmentation and clearing of natural habitat continues. However, such studies remain rare, and for reptiles are mostly restricted to Anolis. Here we used single-season occupancy modeling to infer the impact of the intense 2017 Atlantic hurricane season on the critically endangered Lesser Antillean Iguana, Iguana delicatissima. We surveyed 30 transects across eight habitats on St. Eustatius during 2017-2019, which resulted in 344 individual surveys and 98 iguana observations. Analyses of abundance and site occupancy indicated both measures for 2018 and 2019 were strongly reduced compared to the pre-hurricane 2017 state. Iguanas at higher elevations were affected more profoundly, likely due to higher wind speeds, tree damage and extensive defoliation. Overall, our results indicate a decrease in population estimates (23.3-26.5%) and abundance (22-23.8%) for 2018 and 2019, and a 75% reduction in the number of opportunistic sightings of tagged iguanas between 2017-2018. As only small and isolated I. delicatissima populations remain, our study further demonstrates their vulnerability to stochastic events. Considering the frequency and intensity of hurricanes are projected to increase, our results stress the urgent need for population-increasing conservation actions in order to secure the long-term survival of I. delicatissima throughout its range.