Large marine apex predators have become exceedlingly rare in shallow neritic waters around most Caribbean islands, including the ABC-island (Aruba, Bonaire, Curacao) of the Leeward Dutch Caribbean. This is especially the case for several species of sharks. In May 2000, 24 2-hr long deepwater submersible dives were conducted off the isaldns of Aruba, Bonaire and Curacao, at depths ranging between 80-900m.  Eight shark sightings were recorded, amounting to 6 different species, among which the endnagered Hexanchus griseus. These observations suggest a surprising diversity and density of deepwater sharks aroudn the steep island slopes of leeward Dutch islands.

Globally, geckos (Gekkonidae) are one of the most successful reptile families for exotic species. With the exception of the widespread invader, Hemidactylus mabouia, however, introductions of exotic gecko species are a more recent occurrence in the Caribbean islands despite extensive introductions of exotic geckos in the surrounding Caribbean region. Here we report three new exotic gecko species establishments on the mid-sized Caribbean island of Curaçao (Leeward Antilles). Of the three new exotic species, the mourning gecko, Lepidodactylus lugubris (Duméril and Bibron, 1836) has the largest distribution on Curaçao and has likely been established for the longest time. The common house gecko, Hemidactylus frenatus (in Duméril, 1836) has a limited distribution and was likely a more recent introduction. Finally, the Tokay gecko, Gekko gecko (Linnaeus, 1758), escaped from captivity and is known from a single locality. Both L. lugubris and H. frenatus have had widespread distributions in the greater Caribbean region for over 70 years yet have only been reported from Caribbean islands within the past decade. Comparatively, the scope of G. gecko introductions on Caribbean islands is similar to L. lugubris and H. frenatusbut introduced populations of G. gecko in the greater Caribbean region are virtually absent. These patterns indicate that different introduction pathways (intentional vs passive) may affect the size of exotic geographic ranges, and that the rate of exotic gecko introductions to Caribbean islands may now be increasing.

In Curacao, deep-water FADs with GRP surface buoys were developed and tested. The first FAD was deployed in 1993. Up to now, a total of 5 FADs were deployed ar the following depths: 730, 685, 700, 754 and 574 metres. Chanhes were made to the surface buoy, resulting in an improved design, the MKII surface buoy.

Currently 31 species of terrestrial snails are known from Curaçao, 28 of these are indigenous. The taxonomy of Curaçao land snails has been studied quite well. An inventory of species and subspecies exists. About their ecology however much less is known. The influence of salt spray from the sea on the distribution of some species is discussed. By observing snails in the field some conclusions about their ecology have been reached; these and some further assumptions are hereby presented. Three of the larger species of indigenous snails are discussed. These are Cerion uva, Drymaeus elongatus and Tudora megacheilos. The introduced snails Bulimulus guadalupensis, Zachrysia provisoria and Achatina fulica (= Lissachatina fulica) are briefly mentioned; the latter two are new records for Curaçao.

The use of FAD can improve the production of artisanal fishers, lowering fuel costs and reducing the time spent loitering at sea looking for fish. The FAD act as a habitat for juvile fishes which otherwise might have perished and probably have some positive influence on fish production. Nevertheless the enhancement role of FAD is of very limited importance. Basically FAD do not "fish" but only agrregate despersed fish making it easier to catch them. As with all fishing methods however there ate certain drawbacks. There are limitations where FAD can be placed. Conflicts can arise between fishers from competition for space around the FAD and in some area's FAD are known to attract large numbers of juvenile fish, thus creating a problem of over-harvesting a part of the population which has not yet reached its reproductive potential.

In Curacao FAD have been in use since 1993. During these years several somewhat different FAD have evolved. In this report you can read about Curacao's FAD programme.

Three deepwater fish aggregating devices (FADs) were built, two of which have been deployed along the South coast of Curacao. the objective of the program is to develop duriable FADs which could be anchored at various sites along the coast of Curacao on a permanent basis. The effectiviness of these FADs and their usefulness to the local feet of trolling vessels were evaluated. A Simrad EA300P portable precision echo sounder with a 49KHz transduces was used. The buoys are made of FRP materials and have a spar buoy design. In this report, design considerations, construction detals and deployment methods which may be of use to others are empatized.

This summary tackles the development of fisheries in the Caribbean using FADs. It highlights the principal causes which explain why, in spite of more than thirty years of experimenting, fishing on FADs has not developed as much as had been hoped. Whereas the deep-sea production of pelagic fish by the continental countries of the region has considerably increased since the early eighties, that of the Lesser Antilles has grown more slowly. Anchored FADs have given the boats of the small-scale fisheries from three islands (Guadeloupe, Martinique and Curaçao) access to these pelagic resources. The various modes of development and management of the FADs observed in each island are described. The first available data are used to provide some indications of the effects of the various strategies implemented and the changes induced by this new fishing technique.

The first FAD in the Netherlands Antilles was deployed on 9 March 1993 in Curaçao. In June, 2002 the programme was extended to Bonaire and in December, 2002 to Aruba. The Curaçao programme has been described in considerable technical detail in earlier publications: Buurt, G. van, 1995, 2000 and 2002. During the years, three basic designs of surface buoys have been tested.

The climate in Curaçao is semi-arid to arid. Every century several extended periods of drought occur with practically no rain. A whole system of earthen dams for water conservation was developed since early colonial times. These dams force part of the rainwater into the ground and help maintain groundwater levels; they also help to combat erosion. A large number of smaller dams is more effective than a few large ones. This way ground water levels are influenced over a relatively large area. A few larger ones were constructed in the 20th century but even so these are relatively small; the very largest one having a capacity of 600.000 tons. The next one comes in at 450.000 tons; all the others are substantially smaller. The larger dams are less effective, they store more water above ground in a deeper temporary lake where a larger fraction of the water is subject to evaporation over a longer period of time as compared to a series of smaller dams with the same capacity.

Since most of the food production was local, this system was of the utmost importance. Curaçao is divided in 48 different watersheds (catchment areas). With time the water flows in practically all of these were all extensively dammed, except for the limestone and calcareous areas. Housing developments have lead to the destruction of many dams. There are still a few large ones and about 800 smaller ones which are still functioning. In the past there were at least 1500 of such dams. 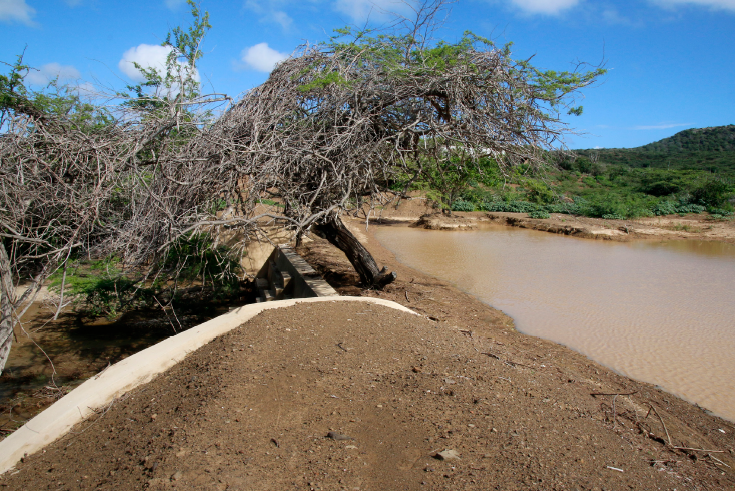